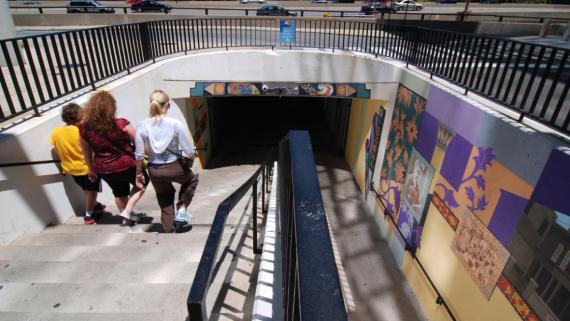 Underpass at Ohio Street and Lake Shore Drive, at the entrance to Jane Addams Memorial Park

In 2011, the Chicago Park District partnered with the Chicago Foundation for Women (CFW) to produce a mural for the pedestrian underpass adjacent to Jane Addams Memorial Park. The artwork marks the twenty-fifth anniversary of CFW, an organization that provides funding and support for the advancement of women. The Chicago Public Art Group, the Richard H. Driehaus Foundation, and the Leo S. Guthman Fund provided additional support for the mural, which is entltled Jane Addams: An Homage.

The artwork celebrates the legacy of Jane Addams (1860–1935), a social reformer and political activist, community organizer, and a tireless advocate for women’s rights. In 1889 Addams cofounded Hull House, America’s first settlement house, on Chicago’s Near West Side. Hull House provided services and facilities to the underserved community, including housing, educational classes, and cultural programs. The facility included a kitchen, a library, and an art gallery. It was the first institution of its kind to offer these amenities to the local immigrant population.

This multimedia mural combines painting, mosaic, and sculptural relief. Many of the painted elements, made by artist Will Nicholson, illustrate details from Addams’s life, such as Hull House and a women’s rights rally. These scenes are complemented by tile renderings of archival photographs, which were created through a process of photo transfer. The sepia-toned images include a portrait of Addams and a depiction of her educating a group of young girls.

The recurring motif of falling leaves—which appear painted, tiled, or in concrete relief—was inspired by the original wallpaper at Hull House. Artist Phil Schuster created the sculpted leaves, as well as two twisting columns, symbolizing Addams’s role as a pillar of the women’s rights community.

Broken-tile mosaic borders surround many of the images in the composition. The borders represent mosaic “quilts,” a reference to the popular pastime enjoyed by many women at Hull House. The mosaics were made by numerous CFW volunteers during a series of workshops led by artist Mirtes Zwierzynski. These gatherings were inspired by art classes held at Hull House over one hundred years earlier. In joining together to make art, the contemporary women both looked to the past and to the future, in hopes of carrying out Addams’s legacy. This sentiment was echoed by CFW President and CEO K. Sujata in promotional material for the artwork’s dedication ceremony: “This mural is a memorial, but it’s also a call to action. . . . Women must continue to work hard to hold our ground and blaze new trails.”