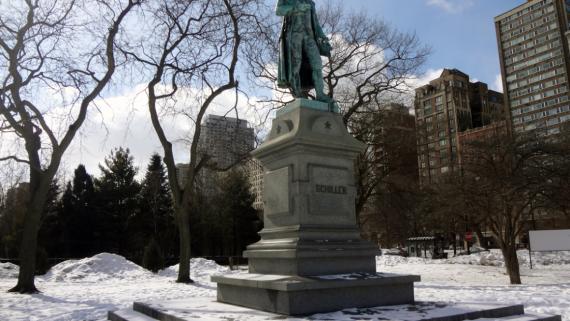 Johann Christoph Friedrich von Schiller (1759–1802) was a German playwright and poet who wrote passionately about the value of freedom and ethics. Schiller was born in Marbach, a town in southwest Germany. An original Schiller Monument has stood in the writer's birthplace since 1876. Created by German sculptor Ernst Bilhauer Rau, the artwork was replicated for Chicago.

In the 1880s, Chicago’s German community had great enthusiasm for Schiller and a committee of Germany Citizens spent several years raising money for a monument to the revered writer. In 1885, after a large group of German immigrants held a meeting in Chicago’s Turner Hall, a corner stone and foundation were laid in Lincoln Park. They committee hired William Pelargus, an artist from Stuttgard, Germany, to recast Rau's original Schiller Monument. The committee also contracted with Lake View marble cutter John Gall to create and attractive granite base for the Chicago monument.

Delegates from sixty German societies planned elaborate ceremonies to unveil the Schiller Monument in Lincoln Park. Despite inclement May weather in Chicago, thousands of people attended the festivities in 1886. This proved to be the first of many donations made by immigrant groups to honor important historical figures from their homelands in Chicago’s parks.

The Laing & Son Granite Company repaired the Schiller monument in 1959 and installed a bronze plaque on its base. Although some of Lincoln Park’s earliest sculptures have been moved several times, this one remains in its original location at the south end of the formal garden.