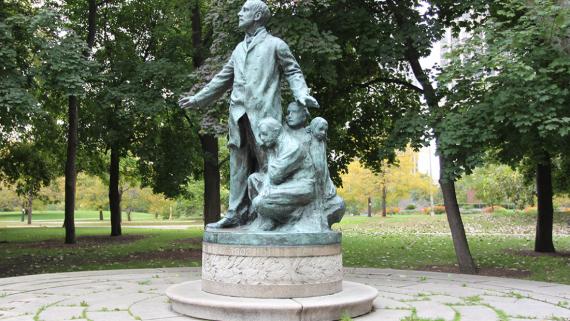 A German immigrant who grew up in Ohio, John Peter Altgeld (1847–1902) went on to become a lawyer, judge, and politician devoted to democratic principles. In 1893, Altgeld was the first foreign-born man to be elected as Illinois governor. Despite spearheading Progressive reforms such as workplace safety and child labor laws, Altgeld was considered an extremely controversial figure because he pardoned three men convicted for inciting the deadly Haymarket Riot of 1886. Although this decision marked the end of the governor’s political career, he did so because he was convinced that the three anarchists had been innocent.

A decade after Altgeld died, the public's opinion of him finally began to improve. In 1913, the Illinois senate appropriated $25,000 for a monument to the reform minded governor. The state sponsored a design competition which resulted in forty different models by reputable artists. Rejecting each proposal, the committee asserted “none of them showed the depth of feeling or the artistic grandeur,” they wanted for the memorial to Altgeld. The group then decided to award the project to Gutzon Borglum, (whose full name was John Gutzon de la Mothe Borglum), now considered one of America’s most famous sculptors.

The son of Danish immigrants, Borglum (1867–1941) apprenticed to a lithographer prior to studying art in Paris. He opened a studio in New York in 1901 and the Metropolitan Museum of Art commissioned Boglum to create its first sculpture by a living American artist. He went on to produce a large Abraham Lincoln Bust, exhibited at the White House and later installed in the U.S. Capitol. Towards the end of his life, Borglum created the iconic Presidential Memorial at Mount Rushmore.

Some Chicagoans complained that Borglum’s figure of Altgeld was too small and that the adjacent figures of a man, woman, and child appeared too servile. But the committee strongly believed that this monument captured Altgeld’s true spirit. Prominent supporters of Borglum's proposal for the John Peter Altgeld Monument included Mayor William Thompson and Governor E.F. Dunne. Despite all of the controversy, the committee had the bronze monument cast as installed as planned in Lincoln Park on Labor Day, 1915.