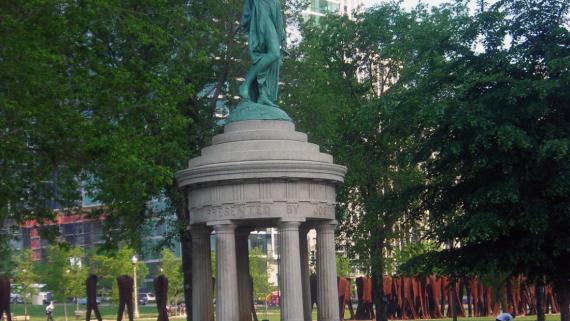 Joseph Rosenberg (1848–1891) left a bequest for a fountain in Chicago “to provide the thirsty with a drink.” Growing up in Chicago and working as a newsboy, Rosenberg could never convince local merchants to spare him some water. As a result, he vowed that if he were ever wealthy, he would create a fountain where newsboys could get a drink on a hot day. He later moved to San Francisco and made a fortune, never forgetting this vow. He left a $10,000 bequest for an ornamental drinking fountain, and asked that it be erected on a prominent corner somewhere on the South Side of Chicago. The South Park Commissioners accepted the donation and installed the monument on the southwest end of Grant Park near his childhood home on South Michigan Avenue.

This monument remains today as an ornamental fountain, but it no longer provides drinking water. The structure emulates a classical Greek temple in miniature. Its lower columned pedestal, which houses the fountain, was designed by Chicago-based architects Bauer & Hill and serves as a base for the sculpture. The eleven-foot-tall bronze figure represents Hebe, daughter of Zeus and Hera. The goddess of youth and cupbearer to the gods, she symbolizes rejuvenation. German artist Franz Machtl sculpted the bronze figure of the goddess which was cast in Munich.

The original conception for the sculpture was to depict Hebe in the nude. The executors of the will, however, were worried that some visitors might be offended, and they did not want to tarnish to the memory of Joseph Rosenberg. They thus decided to present the goddess in draped clothing. The female figure holds a cup in one hand and pitcher in the other—a pose consistent with many other neoclassical depictions of Hebe. In 2004, the Chicago Park District restored the Rosenberg Fountain and its sculpture. The Goddess of Youth fountain in the Lincoln Park Conservatory also depicts the goddess Hebe.