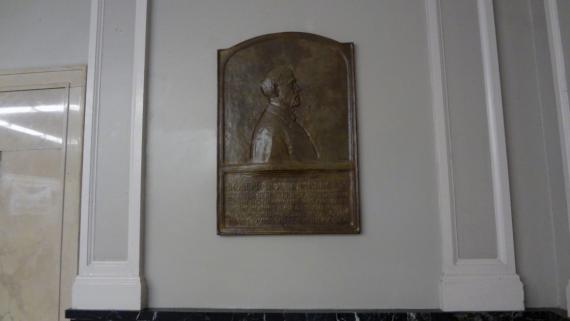 In the spring of 1918, the South Park District’s Board of Commissioners invited Joseph Donnersberger to have a portrait made of himself, which would be displayed in the new McKinley Park field house. Donnersberger, who had previously served on the board for many years, replied that he would take “great pleasure” in receiving this honor. He contacted renowned Chicago artist Lorado Taft, who asked Paul Fjelde, then a sculptor in his studio, to create a bronze bas-relief portrait of Donnersberger. Fjelde’s distinguished bronze panel portrays Donnersberger in profile, with an inscription about his commitment to public service below.

Born in Cincinnati, Ohio, Joseph Donnersberger (1843–1929) moved to Chicago after serving in the Civil War. He established a real estate firm and went on to become president of the Chicago Real Estate Board. Donnersberger was South Park Commissioner from 1889 to 1902 and again from 1911 to 1916. He served as president of the board for ten of those eighteen years, including 1893, the year in which the World’s Columbian Exposition took place in Jackson Park.

Paul Fjelde (1892–1984) was the son of Norwegian immigrant and acclaimed sculptor Jacob Fjelde, who died when Paul was a young child. Despite this untimely death, Fjelde’s mother encouraged her son to become a sculptor. Fjelde studied art at the North Dakota State Normal School. The director of the art program there, Mary Goodrich Deem, believed that Fjelde had potential and suggested that he train under Lorado Taft. Taking up his recommendation, Fjelde traveled to Chicago to do so. A few years after creating the Joseph Donnersberger Bas-relief, Fjelde assisted Taft in creating the Fountain of Time in Washington Park. Fjelde went on to study at the Minneapolis School of Art, the Beaux-Arts Institute of Design in New York, the Art Students League of New York, the Royal Academy in Copenhagen, and the Académie de la Grande Chaumière in Paris. Fjelde had a prolific career that included teaching at the Pratt Institute and the National Academy Museum and School of Fine Arts, both in New York. Among his best-known works are the Lincoln Monument in Oslo, the Pioneers Memorial in Council Bluff Iowa, and the Statue of Colonel Hans Christian Heg, leader of the 15th Wisconsin Volunteer Regiment in Madison, Wisconsin.