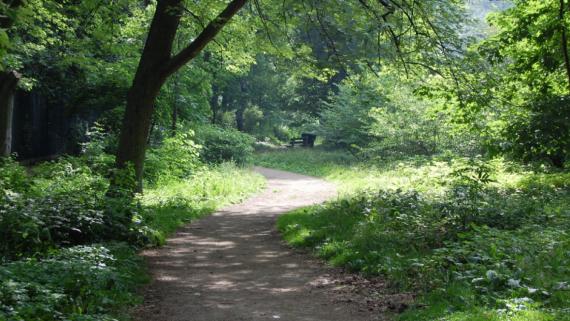 More than 150 different species of birds visit the 10.27 acre Bill Jarvis Migratory Bird Sanctuary each year. Among them six species of herons and bitterns (including black crowned night herons), wood ducks, hawks, yellow-billed cuckoos, hummingbirds, thrushes, vireos, 34 species of warblers, 18 native species of sparrows, and many more. The sanctuary is also home to many small mammals such as rabbit, raccoon, opossum, coyotes, and the occasional fox.

Created in the early 1920s, the sanctuary escaped demolition in 1968 thanks to the mobilization of William Beecher, then director of the Chicago Academy of Science, and of Lake View residents, Bill Jarvis prominently among them. A passionate bird-watcher and native plant enthusiast, Bill Jarvis led a group of volunteers into an agreement with the Chicago Park District to restore and maintain the sanctuary.  Following his death, the sanctuary was renamed in honor of Bill Jarvis and his efforts to protect this special place.

Though the core of the sanctuary is protected by a fence, visitors to Jarvis can still experience the shade of mature trees, and the pop of color from native flowers along a woodchip path that circles the fence. The bird viewing platform on the east side of the sanctuary is a hotspot for local birders, and the purple martin towers along the lakefront near the sanctuary offer nature lovers the opportunity to observe migratory swallows during their nesting season from April through August.

The sanctuary was originally designed to mimic the shore landscape of Lake Michigan. Inside the protective fence are ridges with shallow ponds between them, draining to a marsh on the west side. The pond edges support plants unique species like skunk cabbage (Symplorocarpus foetidus), while the marsh contains plants like sweet flag (Acorus calamus).

Much work has been done in recent years to get the bird sanctuary to its current state of health. The sanctuary has benefited greatly from the dedication and hard work of community volunteers who collect and scatter native seed, plant native species, pick up trash, monitor vegetation and birds, and remove invasive species including buckthorn, aggressive saplings, garlic mustard, and purple loosestrife. Learn more about these kinds of volunteer opportunities by visiting our Community Stewardship Program page.