Lincoln Park Cultural Center Requests for fields at Southfield, Waveland, Lawrence, Montrose, or Foster, or Volleyball at North, Montrose, or Oak will be accepted by Vicky Taghon starting 2/1/19.

Click on link for form | 2021 Season Reminder: The LPCC Request Form may be submitted via e-mail to Vicky.Taghon@chicagoparkdistrict.com 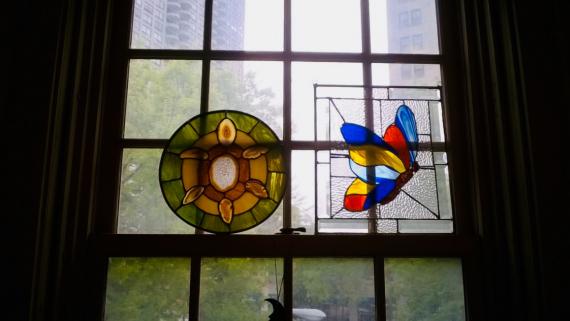 Check out our stained glass programs!

Check out the boat building program.

Our jewelry and lapidary workshop!
Location:

We encourage you to checkout our lapidary and stained glass shop, the ceramics studio, and the full service woodshop. For those with little ones we have an early childhood center filled with fun and exciting programs. Enjoy one of our special events in the auditorium or take a dance lesson in the dance studio.

APA singled out Lincoln Park as one of the 2009 Great Public Spaces in America, for its world class amenities, historic landmarks and buildings, and for the wide range of activities available to park users. Most notably, Lincoln Park is the result of a long-standing commitment by city leaders and citizens to protect 1,200 acres of some of Chicago's most valuable lakefront real estate for the public's use and benefit.

The Lincoln Park Cultural Center is housed in a handsome red brick building that once served as the park’s administrative headquarters.  Built in 1927, the Georgian Revival style building was designed by architect Edwin Hill Clark.  The son of a commission merchant, Clark (1879–1967) grew up in Chicago and graduated from Yale University.  He went on to study architecture at Chicago’s Armour Institute (now IIT) and began working in the office of architect William Otis in 1903.  Several years later, the two formed a partnership known as Otis & Clark, which continued until 1919.  Clark then briefly practiced with two brothers, Chester and Russell Walcott and went on to establish his own firm in the mid 1920s, in which he remained busy until his retirement in 1947.

Edwin H. Clark became well-known for producing stately buildings that represented a range of period-revival styles.  A longtime resident of Winnetka, he designed many elegant north shore homes, such as the Henry T. Stanton House in Winnetka, and the Charles H. Quinlan, and James Ward Thorne estates in Lake Forest.  He also worked closely with Mrs. James Ward Thorne on a series of famous miniature rooms that are now in the collections of the Art Institute of Chicago.  Clark’s work also includes the Winnetka City Hall, Chicago’s Municipal Tuberculosis Sanitarium (now North Park Village) and the planning and design of Brookfield Zoo.  In addition to the Administration Building (now the Cultural Center), Clark produced several other buildings in Lincoln Park, such as the Waveland Clock Tower, the Small Animal House (now Primate House), and Aquarium (now the Reptile House) in the Lincoln Park Zoo.

The Chicago Tribune published a rendering of Clark’s design for Administration Building in 1926.  The following year, the Lincoln Park Commissioners contracted with O’Neil Construction to build the structure for a cost of approximately $125,000.  When it first opened, the administrative headquarters included a board room, offices for the president, commissioners, superintendent, secretary, auditing and bookkeeping, and police departments, as well as an interior basement garage.

After only seven years, the building’s functions shifted when the city’s twenty-two independent park commissions were consolidated into the Chicago Park District in 1934.  The new agency maintained a park police force of over 700 patrolmen with stations in several parks, including a squad room and lieutenant’s office on the first floor of the Lincoln Park Administration Building.  The building also provided offices for other staff members, including photographers, who had darkroom spaces in the basement.  By the early 1940s, the basement was designated as the system’s North District Police Station.  At the same time, the rest of the facility was used for community meetings and various classes including lapidary and jewelry making, costume design, photography, and fly tying and tackle construction.  After the park police force was consolidated into the Chicago Police Department in 1959, the basement station was adapted to arts and crafts facilities such as a wood shop.  In 1965, the building was officially renamed the Lincoln Park Cultural Center and staffed with professional drama, music, puppetry, crafts, and dress and millinery design instructors.  Many similar programs continue to flourish in the building today.

Out of an abundance of caution Park Advisory Council Meetings will be held virtually for the near future. Please contact the Lincoln Park Cultural Center PAC for details.