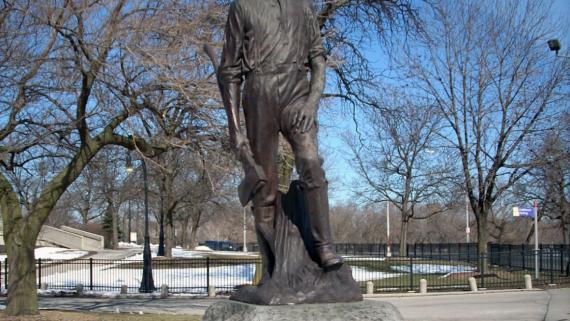 Danish immigrant Jens Jensen (1860–1951) used Chicago’s West Parks as a living laboratory for his evolving Prairie style expression in landscape architecture. Jensen revered the arts, but he believed that some works of sculpture could have a detrimental impact on park landscapes. As General Superintendent of the West Park Commission, he worked with the Municipal Art League to present outdoor art exhibits to explore appropriate types and placement of statuary in the landscape.

At Garfield Park’s Outdoor Art Exhibit of 1909, Jensen displayed a temporary version of Lincoln the Rail-splitter by one of his favorite sculptors, Charles J. Mulligan (1866- 1916). An Irish immigrant, Mulligan had worked as a stone cutter and studied art in night school when he was a teenager. Before long he attracted the attention of acclaimed sculptor Lorado Taft. Mulligan then trained with Taft at the School of the Art Institute of Chicago and later studied at the École des Beaux-Arts in Paris. He returned to Chicago, became a foreman in Taft’s studio, helped found the Palette and Chisel Club, and became active in several other art organizations. Mulligan began teaching at the School of the Art Institute, and by the turn of the century, he had sculptural commissions of his own.

Mulligan produced his first Lincoln sculpture in 1903. A compelling representation of President Lincoln giving an impassioned speech, Lincoln the Orator was installed in the Rosamond Grove Cemetery near Pana, Illinois, with a replica in Chicago’s Oak Woods Cemetery. The donor of that monument had asked Mulligan to depict Lincoln “in the loftiest and most impressive manner.” In contrast, Mulligan wanted his Garfield Park sculpture to portray the martyred president’s humble beginnings in New Salem, Illinois where he held various odd jobs, even working as a rail-splitter for a brief period of time. The temporary version of this humanistic depiction of Lincoln was so well-received that the West Park Commissioners had it recast in bronze in 1911. An article which came out two years later described Lincoln the Rail-spiltter as “a truthful portrait of the man at the most picturesque point in his career.”