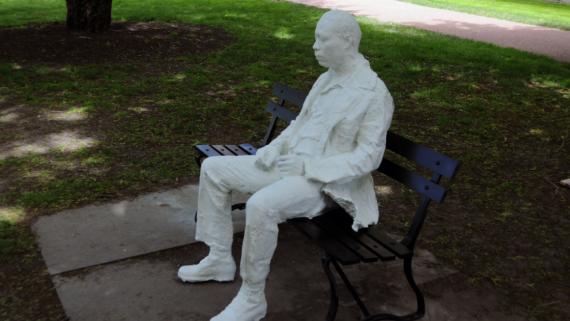 Near Pearlstein Hall on Illinois Institute of Technology's Campus

In 1986, the Illinois Institute of Technology held festivities to honor the centennial of the Ludwig Mies van der Rohe's birthday. An internationally acclaimed architect Ludwig Mies van der Rohe (1886–1969) played an important role to the institution as a teacher, program director, and designer of the campus and many of its buildings. In tribute to the occasion, the university commissioned contemporary artist George Segal (1924–2000) to create the first permanent outdoor sculpture for the campus.

Man on a Bench looks much like Segal’s signature life-like human figures that are made of plaster, however; it is composed of bronze sealed with white acrylic resin. The figure resembles an African American man who is sitting comfortably on a wooden bench. Segal visited the university during the planning phase of the project. According to a campus guide, the artist later reflected “I found myself thinking of several things: the calm order of the campus, the memory of Mies; and the concerned sensitivity of the school to the surrounding community.”

The sculpture was made possible by the B.F. Ferguson Fund of the Art Institute of Chicago and major donors such as Daniel J. Terra and Victor J. Axelrod. Because the Ferguson Fund is devoted only to artworks on public lands, the Illinois Institute of Technology deeded the Chicago Park District the nine-foot by six-foot site on which it is located. The project gave the site, which is officially known as Park 474, the status of Chicago’s tiniest park.

Man on a Bench | Artwork

Man on a Bench | Artwork

Gallery:
Park 474: Man on a Bench
Date Posted: 7/28/2015 Segal pioneered the use of plaster bandages to make body casts. He often finished the pieces in a…
Advertisement