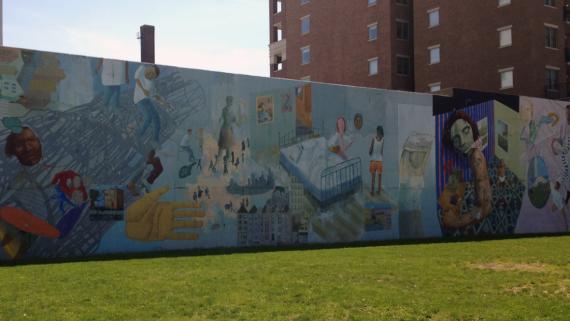 This brightly colored mural enlivens the wall of a private parking garage at the south end of Gill Park in Chicago’s diverse Uptown neighborhood. In the spring of 1997, lead artists Tim Portlock and Beatriz Santiago Muñoz met with a group of local teenagers to conceive its design. The teens identified three main themes that they wanted to address in the mural: the gentrification of Uptown and the resulting displacement of local families; the evolving role of women, especially single mothers; and the unity of many different kinds of people who live in the community.

Portlock and Muñoz worked with the teens to execute the composition, which they titled Matriarchy for a New Millennium. On the far left, two Native Americans are depicted envisioning the urbanization that drove them from their land; their displacement is parallel to that experienced by some Uptown residents in the late 1990s, when the area underwent a period of urban renewal. Other motifs—such as a directional sign stating “10 miles from home to work exit”—suggest that displacement has made the journey home more difficult.

The mural also depicts the literal and metaphoric journeys faced by women, especially single, working mothers. A series of images portray a woman returning home from work, changing her clothes, tackling her daily chores, and taking care of her children. On the right, another woman flexes her bicep and shows off her tattoos, which chronicle important moments in her life, including her pregnancy. She utters the words “And a child who is a visionary.” This alludes to her baby, who holds a flag inscribed with the phrase “Los bebes unidos jamás serán vencidos” (The babies united will never be defeated). The image of the baby represents the hope of a new generation.

Matriarchy for a New Millennium is painted over an older mural: Celia Radek and Cynthia Weiss’s Women’s Equality (1978). Radek and Weiss were part of Chicago’s mural movement during the 1970s, which emphasized public paintings created through neighborhood involvement. This movement helped pave the way for many of today’s public mural programs. Several of the teens who worked on Matriarchy for a New Millennium had parents or other relatives who had participated in the earlier mural. In homage to Radek and Weiss’s original vision, the teens included a small depiction of Women’s Equality in a circular motif at the far right of Matriarchy for a New Millennium. This detail, along with many other compositional elements, is identified in a numbered key painted next to the mural.

Matriarchy for a New Millennium | Artwork

Matriarchy for a New Millennium | Artwork

Gallery:
Gill Park: Matriarchy for a New Millennium
Date Posted: 7/22/2015 Stretching across an enormous wall at the edge of Gill Park, the mural, which is more than 15 years…
Advertisement