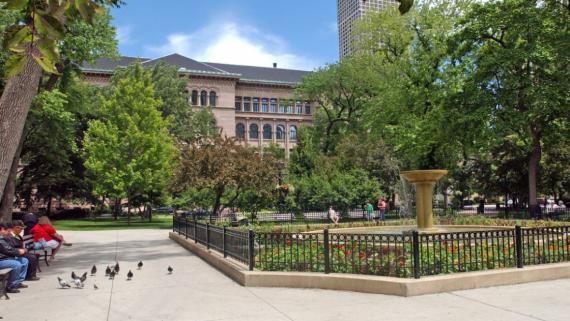 Colonel Robert McCormick (1880–1955), grandson of Chicago Tribune founder Joseph Medill, began serving as a Chicago alderman in 1904. Two years later, after also being elected as the President of the Sanitary District, McCormick decided to donate his alderman’s salary of $600 to a civic improvement. At that time, Washington Square had fallen into a state of deterioration and the City of Chicago allocated $10,000 for its improvement. As a member of the City’s Special Park Commission, landscape architect Jens Jensen (1860–1951) designed improvements to Washington Square. Jensen’s plan included shrubs and flower beds, walkways, and a concrete and limestone fountain as centerpiece of the park. McCormick’s donation covered just over half of the cost of the 1906 ornamental fountain.

By the early 1920s, the area surrounding the park became a colorful, though rundown neighborhood. Rooming houses opened in old nearby mansions and according to The Gold Coast and the Slum by sociologist Havey W. Zorbaugh, Washington Square was becoming "the congregating place of the hobo intellectual." Washington Park, nicknamed Bughouse Square, became a popular spot for public speakers who presented polical and social commentaries, recited poetry, and ranted and raved.

By the early 1950s, the park had deteriorated. Robert McCormick wrote a letter to the City’s Bureau of Parks and Recreation asking for repairs to the fountain and other various improvements to Washington Square. In 1959, the City transferred the site to the Chicago Park District along with more than 200 other small parks and playgrounds.

The fountain was razed in the 1970s; however, by the early 1990s the Washington Square Advisory Council asked to have it reconstructed. Chicago Park District staff members documented the history of the fountain and the park, which is now listed on the National Register of Historic Places and as part of a Chicago Landmark District. In 1999 the Public Building Commission recreated historic McCormick Fountain as part of a city-wide fountain program. The Chicago Park District has also enhanced the park with additional trees, floral plantings, and new benches, lighting, and water fountains that relate to the historic context of the park.