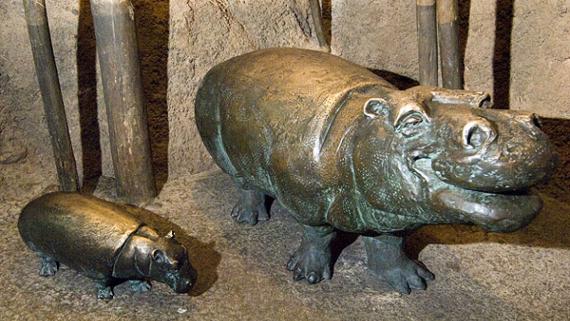 The estate of Mrs. Robert Strauss donated these two life-sized bronze Mother and Baby Pygmy Hippos in 1988, although they were not put on display in the Lincoln Park Zoo until 2003. The mother’s head is raised and the baby appears to be looking at the ground. There is a subtle sense of unity between the two figures, which both stand with an extended, front leg.

Henry Mitchell (1915–1980), a Philadelphia artist who specialized in animals, produced the original pair of hippo sculptures in 1957. They are among a collection of approximately five artworks that Mitchell sculpted for the Philadelphia Zoo in Fairmount Park. It is uncertain as to when the Lincoln Park Zoo replicas were created.