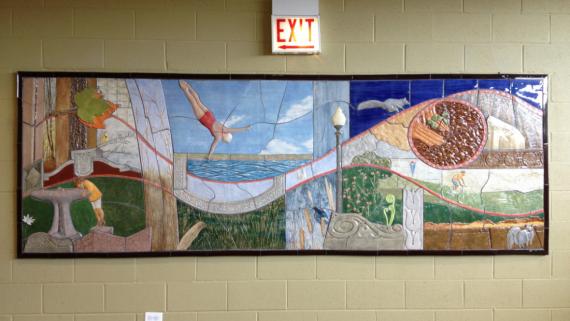 Chicago artist Corinne D. Peterson created The Nature of the Place for the Portage Park Senior Center in 2005. The whimsical porcelain tile murals explore the relationship between memory, location, and environment. The main panel is located in the Senior Center’s community room. Nature is prevalent throughout the composition. Prairies, woods, and marshlands evoke the early history of Portage Park, which was named for several nearby routes used by Native Americans and fur traders to transport their canoes between the Des Plaines and Chicago Rivers. On the upper right, a circular inset depicts two hands planting a seedling; surrounded by a slim ribbon decorated with a Pottawattomie design, the image refers to the neighborhood’s original inhabitants and their great respect for nature and its recurring growth cycles.

Other scenes are inspired by the daily activities at Portage Park. Near the center of the composition, a diver gracefully plunges into a pool, representing the park’s long and storied history of water sports. The original 1913 plan for the park included a swimming lagoon. Decades later, it was replaced with an Olympic-size pool that served as a venue for the 1959 Pan American Games. The outdoor pool was also used for the 1972 U.S. Olympic swim trials, when Mark Spitz set several new world records. At the far left, a young boy balances precariously on tiptoe in order to drink from one of the park’s stone fountains. Other architectural pieces reference buildings around the nearby intersection “Six Corners,” an early and lasting economic center on Chicago’s Northwest side.

The individual scenes come together to create a varied, winding narrative that simulates the capricious nature of memory, which can encompass many times, places, and emotions. The Nature of the Place also includes three smaller ceramic panels installed throughout the Senior Center. These ancillary works depict native wildlife—cardinal and squirrels—welcoming visitors to the park.

The Nature of the Place | Artwork

The Nature of the Place | Artwork

Gallery:
Portage Park: The Nature of the Place
Date Posted: 7/28/2015 Composed of porcelain tiles, the artwork celebrates the history of the park and surrounding…
Advertisement