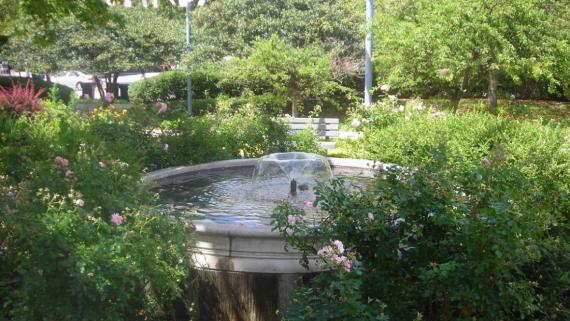 After the Nichols Park Advisory Council had successfully advocated for the expansion of the park to include open space adjacent to Murray School, the group circulated a questionnaire to determine how the community wanted the additional green space to be designed. The result was that most community members advocated for a formal garden with a water feature.

Maria Whiteman, who was then a member of the Chicago Park District’s landscape design staff, designed the garden in 1990. Inspired by the form of traditional four-square gardens, she created a checkerboard of planting beds divided by straight paths, with a circular reflecting basin composed of pre-cast concrete in the center. The Chicago Community Trust helped underwrite the cost of many of the original plant materials. The Hyde Park Kenwood Community Conference’s Garden Fair Committee and the Nichols Park Advisory Council have been maintaining the garden since it was installed in 1992.

A later field house addition to Murray School resulted in the need to make some alterations to the site. The project involved expanding the formal garden to the east and installing a new plaza composed of concrete pavers. The Chicago Park District completed the improvements in the fall of 2005.