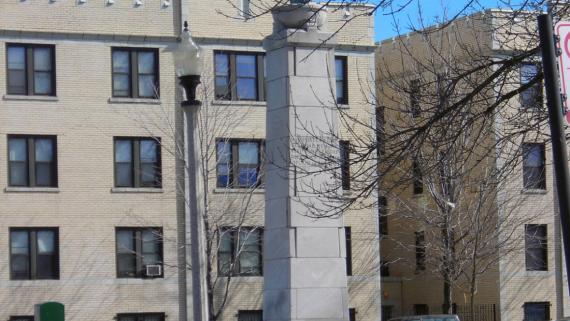 The Norman J. Cornwall Memorial honors soldiers from the west side of Chicago who lost their lives in World War I. Private Norman J. Cornwall, a U.S. Marine, died in action in France in 1918. The Norman Cornwall Post of the American Legion donated the memorial and dedicated it in May 1930.

Standing at more than twenty-feet-tall, the monument is composed of a Georgia-marble pylon with a bronze flame at its peak. Carl J. Epping cast the flame in Louisville, Kentucky, and the Muldoon Monument Company built the pylon based on a design by Captain Shawvan. An inscription across two sides of the shaft reads, “May the flame of eternal memory keep forever the record of the deeds of our comrades, 1917-1918.”

Three thousand people particiapted in the ceremonies to dedicate the Norman J. Cornwell Memorial. Before unveiling the obelisk, American Legion members, boy scouts, and Illinois police officers led a parade through the neighborhood to the monument. Prominent speakers at the ceremonies included Charles S. Dougherty, former assistant state’s attorney and past commander of the Cornwall Post. For years after its dedication, Legionnaires led a procession each Memorial Day to the monument from Our Lady of Sorrows Church, the site of Norman J. Cornwall’s 1918 memorial service.