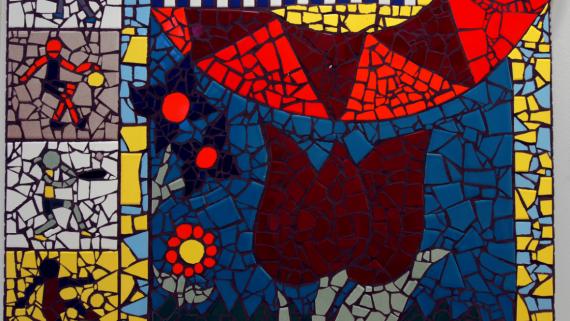 This broken-tile mosaic enlivens the entryway of the Ogden Park field house. It was created during the summer of 1999 under the guidance of Darlene McGhee, who worked with eleven local students.

The composition depicts a park scene, with a giant sun rising over a green field filled with flowers. To the left, a color-blocked band of eight squares portrays different activities that people can enjoy in the park. Basketball, football, volleyball, and baseball are just a few of the many games depicted. The center of the mosaic includes perhaps the most recognizable feature of the Ogden Park playground: a canopied carousel. Here, the carousel is represented by two horses rendered in vibrant shades of red, blue, and yellow. Children have been enjoying the carousel at Ogden Park since 1998, when the playground underwent an extensive renovation.

This mosaic was one of several artworks produced in the late 1990s and early 2000s through the Chicago Park District’s Mosaic Parks Project. Several other mosaics of a similar style are on display at other parks, including Anderson, Seward, and Washington Parks.