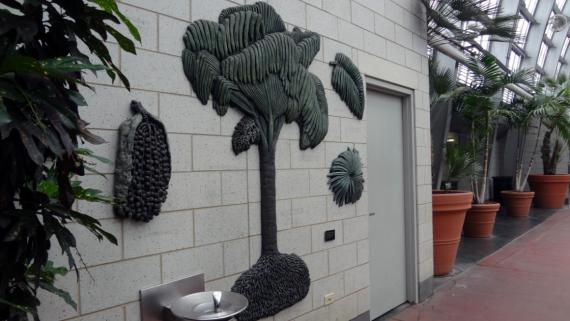 Located in the Palm House

In 2003 the Palm House of the Garfield Park Conservancy underwent the first major rehabilitation since the room’s original dome was rebuilt in the 1950s. Improvements included replacing fiberglass panels with glass, as well as interior upgrades to the environmental controls, such as automatic heating, venting, shading, and misting systems.

To commemorate the project, Chicago artist Phil Schuster created these fiberglass sculptural reliefs. The playful installation demonstrates some of the different seed and leaf forms of palm trees, of which over eighty varieties can be found in the room. Palm trees have various sizes of seeds—ranging from large coconuts to smaller flowering seeds—as demonstrated by the two examples depicted on the left.

To the right, Schuster illustrated two types of leaves, or fronds: the feather (top) and the fan (bottom). The feather style leaf is also shown in the large tree at the center of the display. Schuster rendered the reliefs in his characteristic style, with rough, modeled surfaces colored in muted earth tones. In addition to sculptures of flora and fauna, Schuster is known for depicting animals both real and imaginary. Other fanciful works by the artist enliven local playgrounds at Julia de Burgos, Skinner, and Portage Parks, and his relief sculptures are on view at Lake Shore Park and the underpass leading into Jane Addams Memorial Park.