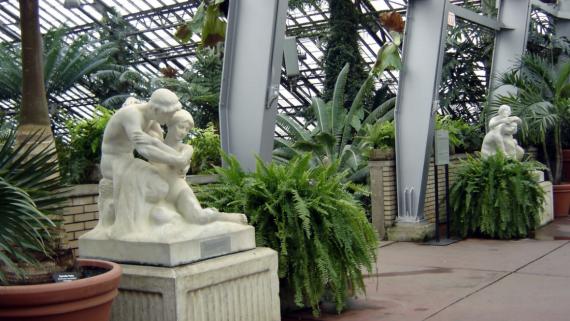 Located in the Conservatory Palm House

Soon after the installation of marble versions of Lorado Taft’s Pastoral and Idyl in Garfield Park Conservatory’s Palm House in 1913, the Chicago Tribune reported that two young girls declared, “O look, the fairies are really here.” This must have pleased Taft, as he had described the sculptural groups as “little whimsies” that represent “care-free maidens and faun-like youths of some remote period as they might idle and play in the forests of Arcadia.” In 1908, Taft when created temporary plaster versions of the whimsical Pastoral and Idyl he had the Garfield Park Conservatory in mind. He said, “It was my thought merely to make something graceful and appropriate for the greenhouse, something that would add to the impression of fairyland which strikes all visitors in that wonderful place. This ethereal effect was made all the more dramatic by the presence of more than one hundred varieties of orchids displayed near the sculptural groups at that time.” These statements were published in the 1913 Annual Report of the West Chicago Park Commissioners.

Chicago’s preeminent early 20th century sculptor, Lorado Taft (1860 – 1936) played an important role in the city’s cultural community. He participated in several local and regional organizations devoted to the arts and the conservation of natural areas such as the Municipal Art League, Cliff Dwellers, and the Prairie Club. Taft shared a friendship with landscape architect Jens Jensen (1860 – 1951) who was also an active member of these groups.

As the General Superintendent and Chief Landscape Architect of Chicago’s West Park System, Jensen organized an outdoor are exhibition in Humboldt and Garfield Parks in 1908 and 1909. A Collier’s Magazine article entitled “Chicago’s Outdoor Sculpture” described the 1908 exhibit in Humboldt Park, asserting that “This was the first real effort to provide a natural and fitting environment for public works of art, and to teach people what kind of sculpture is a real adornment to their public places.” Co-sponsored by the Municipal Art League, the exhibits featured a large collection of temporary artworks that had already been displayed elsewhere, such as models of artworks from the World’s Columbian Exposition of 1893. Pastoral and Idyl were among only a few pieces that had been specifically created for the West Side outdoor exhibits.

Jensen briefly displayed the temporary versions of Pastoral and Idyl in the Humboldt Park Rose Garden in 1908 and then moved them to the Garfield Park Conservatory. The sculptural groups were so well-liked that the West Park Board commissioned Taft to create permanent marble versions of them. He completed the permanent marble sculptures in 1913. Today, the figures fit perfectly into their surrounding scenery, just as they did a century ago.