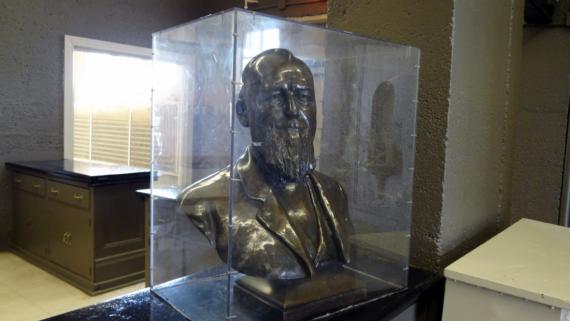 This bronze bust of the Cornell Square Park’s namesake, Paul Cornell (1822–1904), is located in the lobby of the field house. A lawyer and real estate speculator, Cornell became known as the “father of Hyde Park” because he purchased and developed extensive property in the 1850s in what was then a suburban area. By deeding land to the Illinois Central Railroad, Cornell secured transportation linkages with Chicago. Bringing in the railroad ensured the success of his new town of Hyde Park. Cornell also believed that green spaces were vital to the community. He asserted that parks would serve as the “lungs to the great city and its future generations.” Cornell was instrumental in the formation of the South Park Commission, and served on its Board of Commissioners for fourteen years.

In 1905, one year after Cornell’s death, the South Park Commissioners named one of its revolutionary neighborhood parks in his honor. Cornell's relatives donated and dedicated the portrait bust in 1929 in celebration of the twenty-fifth anniversary of the park. Norwegian artist Sigvald Asbjørnsen (1867–1954) sculpted the bronze Paul Cornell Bust. Asbjørnsen, who also created the Leif Ericson Monument in Chicago’s Humboldt Park is best known for his Roald Amundsen Bust in San Francisco’s Golden Gate Park and the War and Soldiers’ Statue, which is part of the General WilliamTecumseh Sherman Monument in Washington D.C.