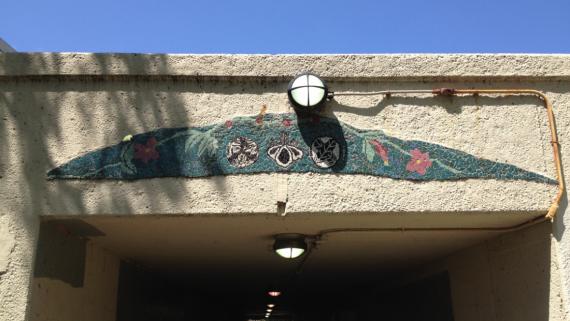 East side of pedestrian underpass at Buena Avenue

In the mid-1980s, the Chicago Park District worked with Greenpeace Great Lakes and members of the Uptown community to renovate a historic rock garden in Lincoln Park and rename it the Peace Garden. Improvements included replanting perennials in the garden’s multitiered beds, replacing missing stones, repairing the original water cascade that trickles down to a lower basin, painting a mural in the adjacent underpass, and creating a narrow arched mosaic above the east entrance to the underpass. Mayor Harold Washington dedicated the Peace Garden in May 1986.

More than one hundred adults and children from the Uptown neighborhood created the mural and mosaic under the direction of artist Lynn Takata. The mural, which was painted on both sides of the underpass, depicted grape vines and other foliage. The small mosaic echoes this theme. It has a dark blue background and a green vine with red flowers, and some leafy black-and-white forms in the center of the composition. Although the underpass mural was painted over years ago, the mosaic remains today.

Takata produced two other community arts projects in Chicago parks: Windform at Loyola Park and Circle of Nature at Warren Park. She believes strongly in participatory art as a means of uniting communities and continues to work with large groups of people to create mosaics and other public artworks in Portland, Oregon, where she lives today.

Gallery:
Lincoln Park: Peace Garden Mosaic
Date Posted: 7/27/2015 Produced by artist Lynn Takata with numerous community members in 1986, this was one of the…
Advertisement