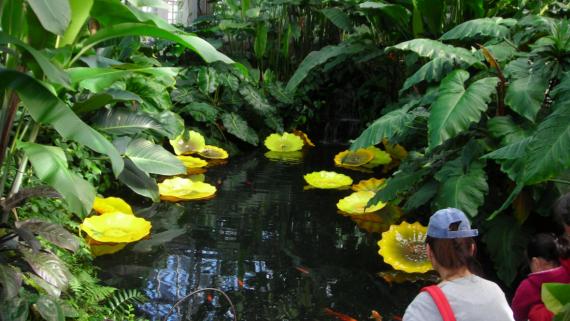 Located in the  Conservatory Aroid House

In 2001, an exhibition of Dale Chihuly’s work at the Garfield Park Conservatory called Chihuly in the Park: a Garden of Glass proved to be an overwhelming success. Chihuly an internationally acclaimed artist, helped establish the Studio Glass Movement, in which collaborative teams of artists produce artworks in lieu of a solitary glass blower. After studying interior design at the University of Washington, Dale Chihuly (b. 1941) attended the University of Wisconsin’s seminal hot glass program, receiving his M.S. in sculpture. He went on to study and teach at the Rhode Island School of Design. He also co-founded the Pilchuck School in Stanwick, Washington, where he served as its artistic director until 1989. Since that time, his work has been featured in major exhibitions all over the world—from Venice to Jerusalem to Tacoma, Washington.

Chihuly and his studio artists found inspiration for the exhibition at the Garfield Park Conservatory from the site and its plant collections. This is especially true of the Persian Pool—an installation of sixteen yellow lilies that Chihuly designed specifically for the lagoon in the Conservatory’s Aroid House. A group of prominent Chicagoans were so enthralled with the exhibition that they raised several hundred thousand dollars to acquire the Persian Pool glass pieces for permanent installation in the Aroid House.