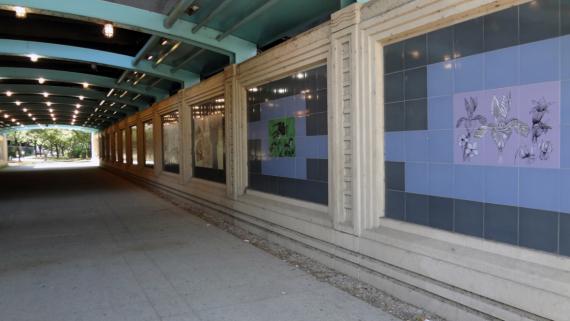 In 1998, the City of Chicago began expanding the pedestrian walkway along the south bank of the Chicago River. The architectural firm of Skidmore, Owings & Merrill designed the framework of the path, which included an enlarged promenade with plenty of room for restaurants, shops, and green spaces. Under a city ordinance, the Chicago Park District was assigned responsibility for the Riverwalk’s concessions. One of the first completed aspects of the project was the Riverwalk Gateway, a trellised, steel and cast concrete structure that connects the east end of the promenade to the lakefront bicycle and pedestrian path. The 170-foot passageway transformed the once-gritty space under Lake Shore Drive into a bright and inviting corridor that opens onto a panoramic view of the juncture between the river and the lake.

Artist Ellen Lanyon’s design for a series of murals was selected as the winner of the Chicago Public Art Program’s competition for the gateway’s interior decoration. Lanyon’s twenty-eight painted-tile panels illustrate the history of the Chicago River, serving as a metaphor for the collective growth and improvement of the city. The series is divided into sixteen narrative scenes and twelve detail panels. The story begins on the west side, along the north wall, with Père Jacques Marquette and Louis Jolliet’s 1673 arrival at the portage of Lake Michigan. Along the top edge of this panel, a bundle of onions alludes to the wild variety (Chicagou) that grew in abundance along the river, from which the city takes its name. Other noteworthy events include: the building of Jean Baptiste Point du Sable’s cabin, the first house on the river; the Great Chicago Fire of 1871; the 1893 World’s Columbian Exposition; and the historic reversal of the river in 1900. Lanyon extended the story up to the present day, as revealed in the final panels, which illustrate the city’s current efforts to restore the river and reinvigorate its edges as a place of leisure and entertainment.

The supporting vignettes include depictions of local plants, flora, and wildlife, as well as geometric representations of waves that allude to the ebb and flow of the river. Rendered in Lanyon’s signature style, the panels display a playful combination of surrealist and realistic details, including imaginative moments such as when local fish jump high above the bridges at Lake, Randolph, and Madison streets. Each of the six-by-nine-foot panels is hand painted on German ceramic tiles, which Lanyon selected for their durability and resistance to the elements.

A native Chicagoan, Ellen Lanyon (1926 - 2013) was a painter and printmaker for over sixty years. Her work has been exhibited and collected by many renowned institutions, including the Art Institute of Chicago and the Metropolitan Museum of Art. Although lived in New York at the end of her life, she was a beloved figure of the Chicago arts community. Riverwalk Gateway is her largest public commission in Chicago.