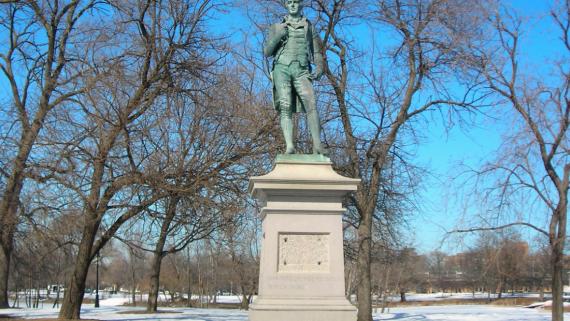 Governor Charles S. Deneen dedicated the Robert Burns Memorial on August 25, 1906. The monument honors Scotland’s most revered poet who is best known as the author of the lyrics to “Auld Lang Syne.” The son of a tenant farmer, Robert Burns (1759–1796) was born near Ayr, Scotland. While working as a laborer and farmer, he began writing poems and song lyrics that brought him international acclaim.

In the 1880s, a group called the Burns Memorial and Monument Association formed in Chicago. The group elected Mrs. Robert Ballantine as its first female director in 1903. She soon travelled to Scotland to meet with sculptor William Grant Stevenson. She commissioned Stevenson to produce a figurative sculpture of Robert Burns as well as bas-relief panels depicting scenes from the poet's works to adorn its pedestal. The bronze Robert Burns Memorial and its bas-relief panels were cast in Edinburgh, Scotland.

The Scottish-American History Club reported that on the day of the memorial’s dedication, members of Mrs. Ballantine’s Ladies Auxiliary arrived in “about a dozen carriages” to celebrate the unveiling in Garfield Park. According to this account, the committee women created an attractive spectacle as they were all “dressed in white, with brilliant silk tartan sashes.”

For years, Scottish Americans participated in wreath laying ceremonies and other commemorative events at the monument to honor Robert Burns. Unfortunately, several decades ago, vandals stole the bas-reliefs panels. The faces on which they were mounted remain blank. Although a similar monument to Robert Burns by William Grant Stevenson is located in Milwaukee, Wisconsin, it did not include the bas-relief panels as part of its design.