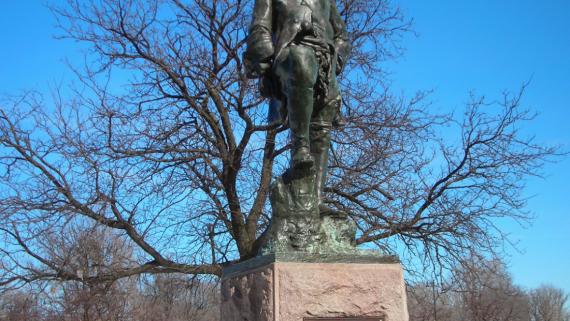 Robert Cavelier de La Salle (1643–1687) explored the Great Lakes area, Mississippi River, and Gulf of Mexico in the 17th Century. He is best known for claiming the Mississippi Valley for France, and naming it “Louisiana” for King Louis XIV. La Salle died during an expedition to Canada in 1687, when his crew mutinied and killed him.

A reform-minded circuit court judge, Lambert Tree (1832–1910), believed that La Salle had made important contributions to American history that had largely been overlooked. To give La Salle the recognition that he deserved, Tree and his wife, Anna, decided to donate a monument to him for placement in Lincoln Park. A few years later, they also purchased the Robert Cavelier de La Salle Monument for Lincoln Park. In addition to providing the city with public sculptures, the two philanthropists also founded Tree Studios, a complex that provided attractive and affordable housing to artists in Chicago.

While serving as the minister to Belgium in 1885, Judge Tree commissioned the then famous Belgian sculptor Count Jacques de La Laing to create the Robert Cavelier de La Salle Monument. La Laing’s figure of La Salle is depicted with a sword and pistol. La Laing cast the bronze sculpture in Belgium and shipped it to Chicago.

Over the years, the sculpture has been moved a few times within Lincoln Park. Originally installed in a small triangular lawn area in the center of W. Stockton Drive, it had become an impediment to automobile traffic by the mid-1920s. The Lincoln Park Commission then moved the artwork southeast to an area east of N. Clark Street and south of W. Menomonee Street. By the 1940s, the monument sat just north of a surface parking lot, in a location that made it relatively unnoticeable. When the Chicago History Museum built a new unground parking structure in that area in the 1990s, the sculpture was moved to a more prominent spot at the corner of N. Clark Street and the La Salle Drive extension.