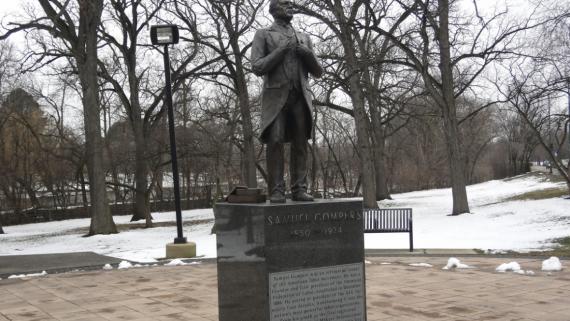 This bronze sculpture memorializes Samuel Gompers (1850–1924), an important figure in the American labor movement. Born in London to a poor family of Jewish immigrants from Holland, Gompers began working with his father as a cigar maker at the age of ten. He continued working as a cigar maker after he and his family settled on New York’s Lower East Side in 1863. The following year, he joined the United Cigar Makers and became increasingly concerned about conditions for workers and relations between the existing labor organizations.

In 1875, the Cigar Markers’ International Union elected Gompers as its presdent. He went on to help found the Federation of Trade and Labor Unions, which was later reorganized as the American Federation of Labor. Gompers served as the organization’s first and longest serving president. Known today as the AFL-CIO, this federation continues to be one of the country’s most powerful labor organizations.

Nearly forty different labor unions worked together for several years to commission the Samuel Gompers Monument. A major donation from the Edward M. Marx Foundation helped make the project possible. The life-size bronze figure was sculpted by Susan Clinard, an artist who lived and worked in Chicago for twelve years prior to relocating to West Haven, Connecticut.

Clinard came back to Chicago to participate in the monument’s unveiling ceremony on Labor Day, 2007. State and local government officials joined many voices from labor unions around the state in honoring the memory of this important advocate for American workers. Larry Spivack, President of the Illinois Labor History Society, asserted that the new Gompers Monument serves as a reminder of workers' rights to organize and bargain collectively for wages and other benefits—principles championed by Samuel Gompers.