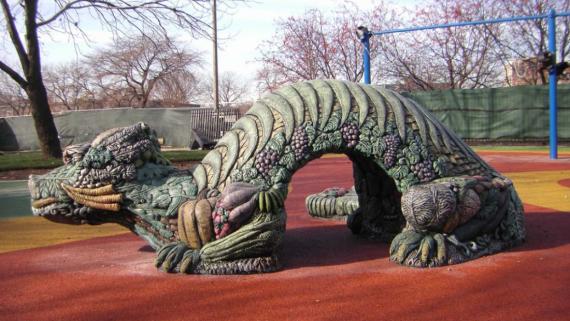 Phil Schuster is an accomplished local community artist whose work can be found in many locations throughout the city including the Garfield Park Conservatory, the Gallery 37 Dance Studio, Palmer Square Park, Roscoe Playground in Lincoln Park and Visitation, Mather, and Lake View high schools. Schuster began working as a ceramicist twenty five years ago. When he ran out of space for his large pieces, he began placing them in gardens, outdoors.

Schuster became interested in finding a material that would be more durable when exposed to Chicago’s weather, so he developed a new type of concrete, which is essentially a fiber-reinforced acrylic modified stucco mix. This allowed him to embellish three-dimensional forms such as planters and benches with relief sculptures in earthy colors. He explains, “I am attracted to relief sculpture because it allows me to create a picture plane with layers of depth. These low reliefs often become the surface treatment of sculptural forms that are usable objects in public space—things such as benches, planters, birdbaths, or paving stones. I find low relief sculpture to be more compatible with public places, making its presence felt in a non-invasive way.”

Working with the Chicago Public Art Group, Phil Schuster and Jennifer Gotowski created a large climbable dragon for the Skinner Park Playground. The artwork was funded in part by a donation from the Skinner Park Advisory Council and Tax Increment Financing Funds. Inspired by the advisory council’s plans for a community garden in the park, the dragon is composed of multi-colored fruit and vegetable relief sculptures made of Schuster’s concrete mix.