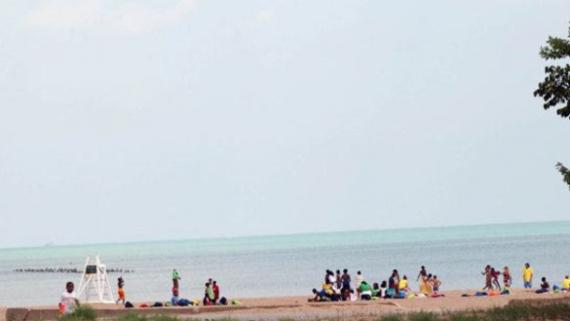 Within: South Shore Cultural Center Park
Phone Numbers:
312-74-BEACH
Accessibility Details: A beach is considered accessible if it has an accessible path of travel (beach walk) to the shoreline.
Features: Beaches
Is Accessible

Swimming is only permitted when lifeguards are on duty from 11 am – 7pm.

Swimming is only permitted when lifeguards are on duty from 11 am – 7pm.

South Shore Beach is part of the South Shore Cultural Center, which is considered to be the jewel of the neighborhood. With its magnificent country club-like interior, this facility features a solarium, formal dining hall, Paul Robeson Theater, Washburne Culinary Institute, the Parrot Cage Restaurant, and the Dr. Margaret Burroughs gallery. The site is a 65-acre park with a 9 hole golf course, tennis courts and a circular beach house with restrooms and showers. The beach house is located just to the east of the Cultural Center on the beach. The site is also home to the Chicago Police Department’s mounted unit.

South Shore also has its own nature sanctuary. Visitors can walk along a boardwalk near the beach and observe the emerging sand dunes, a small wetland, the prairie landscape, woodland and a variety of wildlife in the area.

Distance swimming is from south end rocks to trees at north end of beach, parallel to shore at boat line.

The South Shore Cultural Center originated as the South Shore Country Club. In 1905, Lawrence Heyworth, president of the downtown Chicago Athletic Club, envisioned an exclusive club with a “country setting.” Heyworth selected an area of unimproved south lakefront property that was often used for fishing and duck hunting for the new country club.

The club's directors hired architects Marshall and Fox—later known for designing many of Chicago's most luxurious hotel and apartment buildings, including the Drake Hotel. For inspiration, Heyworth provided a photograph of an old private club in Mexico City, but asked the architects to exclude expensive embellishments.

As the club could not yet collect dues, work had to proceed quickly and inexpensively. Members Marshall Field and A. Montgomery Ward lent their store delivery wagons to transport turf, sod, and trees. Mr. Worcester, vice president of the Peoples Gas Company, put in lighting for the grounds and clubhouse.

Enjoying immediate success and social importance, South Shore Country Club quickly outgrew its facilities. Marshall and Fox were hired again to build a new clubhouse, which incorporated the original ballroom. Constructed in 1916, the larger and more substantial reinforced concrete building, like the original, was designed in the Mediterranean Revival style.

The country club's membership peaked in the late 1950s. Simultaneously, many African-Americans began settling in South Shore. Because the private club excluded black members, it went out of business in the 1970s.

In 1974, the Chicago Park District purchased the property to expand its lakefront facilities. The Park District planned to demolish the severely deteriorated clubhouse. However, community members rallied together to save the historic building.

The Park District started rehabbing the clubhouse as a cultural center in the late 1970s, and has restored features including the front colonnade, entry gate and stables.