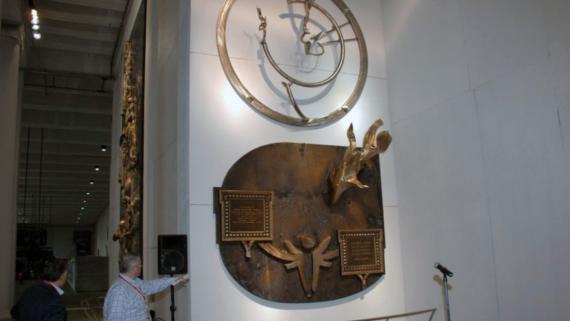 Located near Gate 15 at Soldier Field.

In July of 2008, Mayor Richard M. Daley dedicated a new artwork in Soldier Field to commemorate the fortieth anniversary of the Special Olympics. Richard Hunt (b. 1935), a highly acclaimed African-American artist from Chicago, sculpted the bronze memorial. A product of the Chicago Public Schools, Hunt attended the University of Illinois at Chicago and the University of Chicago before earning a degree at the School of the Art Institute of Chicago. In the 1950s, he began receiving national attention for his abstract metal sculptures, often made of found materials. Since that time, he has taught or served as an artist–in-residence at over twenty colleges or universities across the United States. Richard Hunt’s work has received world-wide attention and he is a recent recipient of a Lifetime Achievement Award from the International Sculpture Center.

Like Richard Hunt, the Special Olympics possesses significance at both the local and international levels. The Chicago Park District played a pivotal role in the formation of what is now the world's largest program that provides sports training and athletic competition for children and adults with intellectual disabilities. Chicago’s Judge Anne Burke fostered the creation of Special Olympics in Chicago. Working as a therapeutic recreation specialist for the Chicago Park District in the 1960s, Burke (née McGlone) developed creative ways to help people with cognitive disabilities develop new skills and enjoy themselves. Burke received a grant from the Kennedy Foundation that allowed her to launch the first Special Olympics event at Soldier Field in 1968. At its inception, approximately 1,000 athletes from 26 states and Canada participated in competitions in several different sports which were largely held in Soldier Field.

The sister of President John F. Kennedy, Eunice Kennedy Shriver (1921 – 2009) was deeply committed to Special Olympics, and through her leadership, the organization continued to grow. Today the Special Olympics involves more than one million athletes in 150 nations. Every year, millions of people are able to witness the courage, character, dedication, and capabilities of Special Olympics athletes around the world.