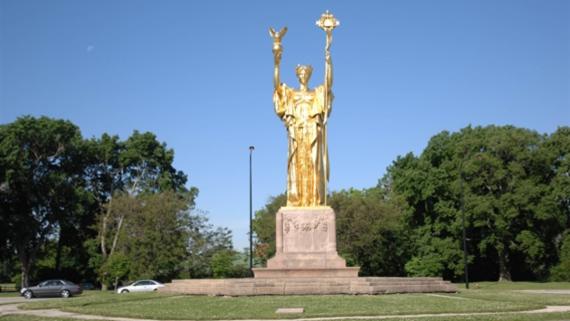 Installed in 1918, the Statue of the Republic commemorates the twenty-fifth anniversary of the World’s Columbian Exposition in Jackson Park and the centennial of statehood for Illinois. The twenty-four-foot-tall gilded bronze sculpture is a much smaller and slightly modified version of Daniel Chester French’s original sixty-five-foot-tall Statue of the Republic, one of the most iconic features of the World’s Columbian Exposition of 1893. (On its base, the original sculpture rose to a total height of one hundred feet.) Composed of gilded plaster, the original monumental female figure stood with outstretched arms at the eastern end of the fair’s Court of Honor.

At that time of the exposition, the Statue of the Republic was among the nation’s tallest sculptures. It was second only to the New York’s Statue of Liberty, the famous gift from the People of France to commemorate the centennial of the signing of the Declaration of Independence. Though temporary in nature, Chicago's colossal Statue of the Republic was widely admired. By the turn of the century, Daniel Chester French (1850–1931) had received recognition as one of the nation’s leading sculptors. French later went on to produce the work for which he is best known—the monumental figure of Abraham Lincoln for the Lincoln Memorial in Washington, D.C.

Shortly after the fair, a fire destroyed the original Statue of the Republic. In 1918, the B.F. Ferguson Fund and the Woman’s World Fair Fund commissioned Daniel Chester French to create the commemorative version. The existing gilded bronze twenty-four foot tall statue stands on a ten-foot-high base by architect Henry Bacon. The total project budget of $56,000 included $47,000 that had remained in the treasury of the exposition. Installed on the site of the Fair’s Administration Building in Jackson Park, the monument was unveiled on May 11, 1918. Although World’s Fair visitors had nicknamed the original sculpture “Big Mary,” the smaller version is known best today as the “Golden Lady.” The commemorative sculpture was re-gilded and rededicated in 1993 in tribute to the centennial of the World’s Columbian Exposition.

Statue of the Republic

Statue of the Republic