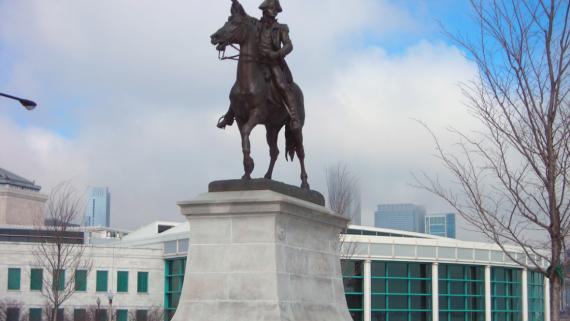 In the median of E. Solidarity Drive southeast of Shedd Aquarium

In the late 1880s, a large group of Chicagoans of Polish descent began raising $30,000 for a monument to Thaddeus Kosciuszko, Polish hero of the American Revolution. After arriving in America in 1776, Kosciuszko joined the Continental Army. As a skilled engineer, he made significant contributions to the war by designing fortifications for several strategic places such as Philadelphia, West Point, and Saratoga. Kosciuszko later returned to Poland to lead his native military in a 1794 uprising.

The Kosciuszko monument committee selected Humboldt Park as the site for the sculpture because many Polish immigrants lived nearby. Many generous contributions soon came in, including a $500 donation from the celebrated pianist (and eventual Prime Minister of Poland) Ignaco J. Padrewski, who had met with the monument committee during a visit to Chicago. The group commissioned a sculptor from Poland—Kasimir Chodzinski (1861–1920) to produce the bronze equestrian sculpture of Kosciuszko. During his brief period in America, Chodzinski also produced a Casimir Pulaski Monument for Washington D.C.

More than 50,000 Polish-Americans gathered in Humboldt Park for the dedication of the Thaddeus Kosciuszko Monument in 1904. Ceremonies included a parade, choral performance, the reading of a congratulatory letter from President Theodore Roosevelt, and addresses by dignitaries. Throughout the following decades, similar festivities took place in Humboldt Park near the monument in observance of Poland’s Constitution Day in May.

In the mid 1970s, the Chicago Park District removed the statue when an adjacent ball field was enlarged. In 1978, the Polish National Alliance, Polish Roman Catholic Union, and Polish Women’s Alliance sponsored the conservation and relocation of the monument to newly-renamed Solidarity Drive on Northerly Island. The groups also installed a time capsule beneath the sculpture containing many documents relating to Polish history. In 2008, the time capsule was rediscovered during a roadway improvement project that required the slight relocation of the sculpture. The original items from the time capsule were conserved and additional items were added. Subsequently, the time capsule was once again placed under the monument but at its new location.