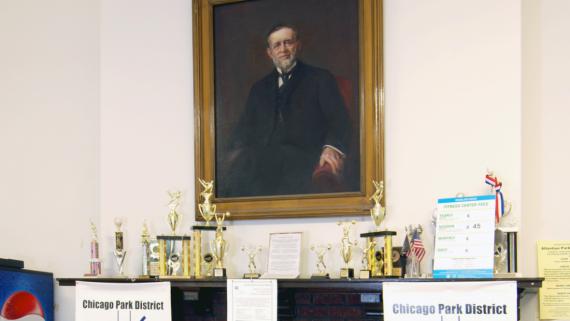 This dignified portrait of Thomas A. Rutherford hangs in the lobby of the Rutherford Sayre Park field house. Born in 1838 in Steuben County, New York, Rutherford moved to the Chicago area when he was a young boy. His family was one of the first to settle in Jefferson Township on Chicago’s northwest side. Rutherford married in 1863 and purchased land in the nearby Montclare area, where he made a living as a farmer and property owner. He was on the Board of Directors of Pioneer Trust and Savings Bank, and from 1873 to 1894, he was Montclare’s first postmaster general. In addition to serving the community, he made several public benefactions: he provided funds to the board of education to build a local school, and he supported the Congregational Church of Montclare by donating $10,000 and a pipe organ in memory of his wife, Julia.

In 1915, Rutherford gave five acres of land to the Northwest Park District, one of the small independent park commissions that became part of the Chicago Park District twenty years later. The donated land—located at the southwest corner of Belden and Oak Park Avenues—was adjacent to five additional acres that his widowed sister-in-law, Emily G. Rutherford, had given in 1909. The ten-acre plot was named Rutherford Park in the family’s honor. A field house, including an assembly hall and a gymnasium, was erected in 1916. Per a stipulation in the Rutherford deed, the original building also included a bowling alley, an unusual feature for a Chicago park field house. In 1999, Rutherford Park was combined with two other neighboring parks to form Rutherford Sayre Park.

Very little is known about the Rutherford portrait. At a meeting of the Northwest Park District Board of Commissioners on June 27, 1921, northwest side resident Lelia V. Pendarvis requested permission to place portraits of Thomas and Julia Rutherford in the field house. Only the painting of Thomas Rutherford remains today. The artist who painted the portrait is unknown; however, Rutherford’s refined suit, elegant posture, and kind expression lend him air of distinguished reserve. In 2006, the painting was conserved by the Chicago Conservation Center.