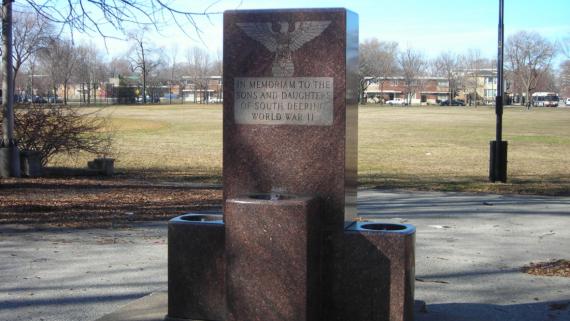 Renowned sculptor Frederick C. Hibbard, who lived on Chicago’s South Side, produced this World War II Memorial Fountain. Installed in 1947, Trumbull Park’s 2,600-pound granite memorial fountain was much more substantial than one Hibbard had created for Ogden Park two years earlier. Members of the South Deering community had formed a Memorial Fund Committee after World War II. Committee members asked every family in the Trumbull Park community to contribute to the fountain which honors the men and women from the neighborhood who served in the war. In addition to door-to-door canvassing, the committee raised money by holding two welcome-home parties for the returning veterans.

It took twenty-nine months of planning and fund-raising before the fountain could be realized. In a letter written by Andrew Diorio, secretary of the Memorial Fund Committee, to Horace Wulf, editor of the Daily Calumet, Diorio stressed the community’s commitment to the project. He wrote: “Every denomination, sect, creed, and political belief has assisted in securing the Memorial Fountain. South Deering can well be proud of this committee that embodied all these various denominations and beliefs. Every nationality was well represented—another All-American achievement.” The fountain was dedicated on November 23, 1947 in the presence of prominent civic, industrial, and military officials, as well as many members of the Trumbull Park community.

Frederick Cleveland Hibbard (1881–1950) worked as an electrical engineer before he decided to become an artist. He went on to study at the School of the Art Institute and became a prolific Chicago sculptor. His large collection of public works includes the General Ulysses S. Grant Monument at Vicksburg National Park, the Abraham and Mary Todd Lincoln Monument in Racine, Wisconsin, the Wallach Fountain in Chicago’s Burnham Park as well as many other local fountains and sculptures.