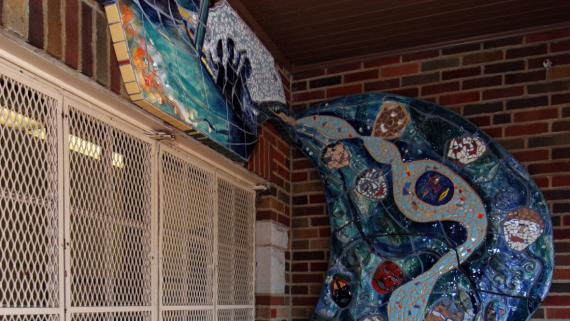 Inspired by the writings of children’s author Eugene Field, this whimsical mosaic was created through a partnership between the Chicago Park District, Gallery 37, and the Chicago Public Art Group. The project’s lead artist, Gerry Lang, worked with a diverse group of teenagers to produce the artwork.

Gerry Lang (Meherrin, b. 1944) is a local multimedia artist who makes, mosaics, painting, ceramics, sculpture, and jewelry, and has taught art for many years. He has a bachelor’s degree in fine and applied arts from Hampton University in Virginia and a master’s of fine arts from Michigan State University. Lang is of American Indian descent. In a Chicago Tribune article entitled “Leave Your Mind at the Door” he asserted, “I discovered that art to my people was an integral part of daily life. Unlike Western art, it isn’t made to be shown in galleries or museums, but is for the benefit of everyone. . . . I try to show my students that the source of creativity is found not in the rational mind, but in the heart.”

Lang encouraged the students to “follow their hearts” during a series of workshops in which they read Field’s poetry and divided into groups to develop their ideas into sketches. Their designs were then transformed into an intricate, multipanel mosaic of ceramic and broken tile. Tucked into the entryway of the field house, the mosaics span all three sides of the vestibule. The south panel depicts a child on a swing that hangs from a tree inspired by Field’s poem “The Bell-Flower Tree.” Sitting in the tree is a bird that represents Field’s “Dinkey-Bird” from the land of “Wonder-Wander.” The other panels include references to imagery from one of Field’s most famous poems, “Wynken, Blynken, and Nod,” including children sailing in a wooden shoe, a laughing moon, and herring-fish in the sky.

According to Lang, he and the students added other, more subtle, symbolic elements to the composition. For instance, the child on the swing is wearing a tee shirt embellished with a small design of two bars below three dots. This is the Mayan symbol for the number thirteen, representing transformations. On the child’s face, there is a small tattoo. This connects with Lang’s Iroquois heritage, as body art was a common practice in his as well as other indigenous cultures. The artist also encouraged the students to incorporate a sense of their own identities into the mosaic. He worked with them to create self-portraits in clay and broken tile, many of which are included throughout the composition.