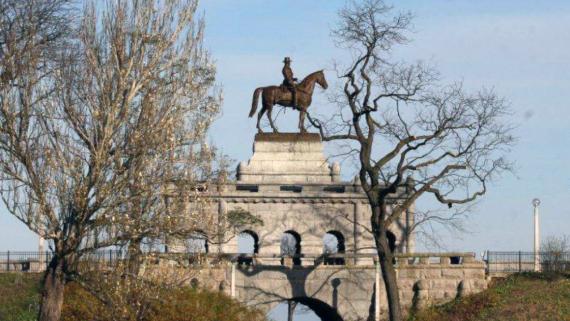 Civil War hero and two-term President of the United States Ulysses S. Grant (1822–1885) is memorialized with this equestrian bronze sculpture which stands on a massive arched base of rusticated stone. After bringing the Civil War to a close in 1865 as commander of the entire Union army, Grant was elected president in 1869 without having had any prior political experience. The American people had great reverence for the famous general from Illinois. Within days of his death in 1885, tens of thousands of people began donating dimes, quarters, and dollars to commission a monument in his honor.

William Le Baron Jenney, the noteworthy designer of early skyscrapers, recommended that the memorial should include a monumental Romanesque arched structure. More than a dozen artists competed for the project. The winning proposal came from Louis T. Rebisso (1837–1899) a Cincinnati-based artist who had emigrated from Italy to America in 1857. Rebisso produced an eighteen-foot-tall equestrian bronze statue of Grant above an elegant version of the arched structure that Jenney had suggested.

When the sculpture was dedicated in 1891, more than 200,000 people attended the ceremonies. The event began with a procession of carriages at the Auditorium Building that passed the site of old Fort Dearborn, and continued along Michigan Avenue to the monument's dedication in Lincoln Park. Participants included Grant’s widow and relatives, members of his regiment, cabinet members from his presidency, as well as several governors and senators. During the emotional ceremonies, a dignitary read remarks from President Harrison describing Ulysses S. Grant as “a tower of strength and confidence in the crisis of our Civil War.” The Chicago Park District fully conserved the Ulysses S. Grant Memorial in the mid-1990s. This included cleaning and tuckpointing the masonry, treating the bronze sculpture, and installing new lighting.