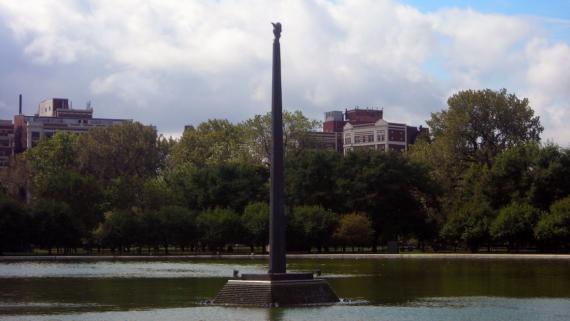 Virginio Ferrari (b. 1937) created Ecstasy, an abstract bronze sculpture that was installed in the center of Harold Washington Park’s Model Yacht Basin in 2007. Born and raised in Verona, Italy, Ferrari was the son and grandson of stonecutters. He studied, taught and exhibited art in Italy before coming to the United States. In 1966, the University of Chicago hired Ferrari as an assistant professor and artist in residence—he held both positions until 1976. He continued living in Chicago and producing artworks that have been exhibited throughout the United States, as well as in countries in South America, Europe, and Asia.

In 1974, Ferrari created this elegant bronze sculpture while working at the University of Chicago’s Lorado Taft Midway Studios. Two years later, Mr. and Mrs. Albert Pick, Jr. purchased the artwork and donated it to the Ravinia Festival in Highland Park, Illinois. The Picks named the sculpture Ecstasy because they felt that it evoked the form of stargazing lovers.

Ecstasy remained at the Ravinia Festival until 1998, when Bruce and Martha Clinton, owners of the Regents Park high-rise apartment building in the Hyde Park community, acquired the sculpture at the suggestion of the artist. Several years ago, the Clintons agreed to donate the artwork to the Chicago Park District,specifically for installation in Harold Washington Park. The park’s advisory council had developed an improvement plan that included the renovation of the site’s historic Model Yacht Basin. The council arranged to install Ecstasy in the center of the circular water feature. The Clintons and several other donors provided funds for site improvements, and Mayor Richard M. Daley dedicated both the sculpture and the renovated basin in the summer of 2007.