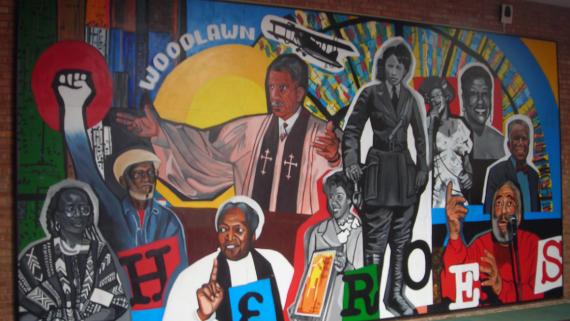 In 2005, the Chicago Park District collaborated with the Metropolitan Area Group for Igniting Civilization (MAGIC) to commission a large mural for Harriet M. Harris Park. The project was co-sponsored by the After School Matters art apprentice program, which prepares teenagers for careers in the arts. After interviewing two hundred applicants, MAGIC selected twenty-five teens to participate in the ten-week-long project. Lead artist Damon Lamar Reed worked with the students to produce the mural, which commemorates past and present heroes of the Woodlawn community.

To gain inspiration for the composition, the teens reached out to local residents, who suggested various individuals whom they felt had a great impact on the area. The children researched each of the community heroes and selected images to use in the mural. Ten figures are featured in the final composition. Near the center of the painting, Bishop Arthur Brazier (1921–2010) is depicted with outstretched arms. Brazier served the Woodlawn community and led the Apostolic Church of God for nearly five decades. He was also responsible for bringing Dr. Martin Luther King, Jr., to Chicago in 1964. Just below Bishop Brazier is an image of Reverend Consuella York (1923–1995). Known as Mother York, she was Chicago’s first woman ordained as a Baptist minister. York was renowned for her dedication to the inmates of Cook County Jail, whom she ministered for forty-three years.

At the center of the mural, aviator Bessie Coleman (1892–1926) stands tall and proud in her flying gear. The first female pilot of African-American descent, Coleman moved to Chicago in 1915 and worked as a manicurist before aspiring to become a pilot. No American aviation school would accept her, however, and she had to move to France in order to learn to fly. Coleman’s fearless pursuit of the airways has been an inspiration for many generations of women.

Playwright and author Lorraine Hansberry (1930–1965) grew up in the Washington Park Subdivision of the Woodlawn Community. In the mural, she is shown holding a copy of her best-known work, A Raisin in the Sun, which tells the story of her family’s struggle in racially segregated Chicago. It was the first play written by an African-American woman to be performed on Broadway, where it debuted in March 1959.

Music legend Minnie Riperton (1947–1979) is depicted on the right side of the mural. Known as the “lady with the high voice and flowers in her hair,” Riperton grew up on the South Side and began her career with Chess Records as a back-up singer for several artists, including Etta James and Muddy Waters. She went on to have a successful solo career before her untimely death at age thirty-one. Riperton is illustrated here lost in song, her head tilted back as she belts out a melody.

Some of the more current heroes depicted include African-American author, Sam Greenlee (b. 1930), who is portrayed on the left side of the mural raising his right fist into the air. This traditional gesture of the Black Power movement is a reference to Greenlee’s famous 1969 novel, The Spook Who Sat by the Door. Often described as the “first Black Nationalist novel,” the book follows the journey of a black CIA operative who uses his government training to form an underground guerilla movement for African-American freedom.

Community activist Mattie Butler (b. 1940) is represented at the far lower right. Her stoic image reflects her position as a pillar of the Woodlawn neighborhood during the past three decades. In 1980, Butler founded Woodlawn East Community and Neighbors after learning that thirteen children had perished in an arson fire on her block. The non-profit organization quickly became known for preserving at-risk and abandoned buildings, and they are now one of the largest community advocates for affordable, mid-income housing in the neighborhood.

The dynamic composition includes the title Woodlawn Heroes. The mural, which fills most of a large wall in the lobby of the field house, provides inspiration for the entire community.