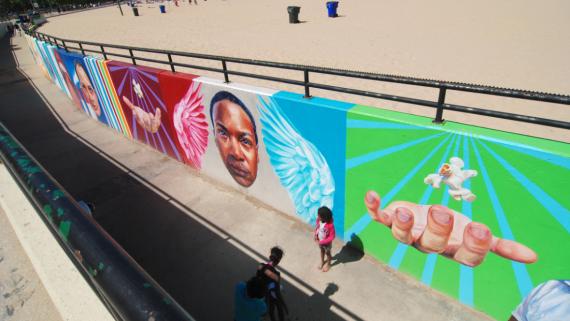 During the summer of 2011, the Chicago Park District commissioned artist Jeff Zimmermann to create an expansive mural on a concrete wall adjacent to Oak Street Beach. The large, 260-foot artwork greets pedestrians emerging from a nearby underpass and is also visible from the lakefront trail.

Entitled You Know What You Should Do, the mural portrays themes of environmental awareness and beach preservation. Images of crumpled food wrappers remind beachgoers of the adverse effects of littering. A subtle red cross, situated between an outstretched hand and a seagull, dissuades the public from feeding the birds. These messages are reinforced by the familiar depiction of Uncle Sam, who implicates viewers with his trademark pointing gesture.

Other illustrations—such as a giant ice cream cone and a Chicago-style hot dog—represent the lighthearted, carefree aspects of a summer day at the beach. The composition also depicts several diverse figures, modeled after beachgoers Zimmermann encountered while painting the mural. To create the large-scale representations, the artist began by photographing his subjects. He then converted the pictures into transparencies and projected them onto the wall as a guide. This method allowed Zimmermann to customize image size while maintaining the precise detail of the photographs. Painted in bright, glossy colors, the saturated images are complemented by a background of geometric patterns. Overall, the lively scene communicates a serious message in a fun and accessible style reminiscent of Pop art.

You Know What You Should Do | Artwork

You Know What You Should Do | Artwork

Gallery:
Lincoln Park: You Know What You Should Do
Date Posted: 7/27/2015 Artist Jeff Zimmermann incoporated portraits of real people who use Oak Street Beach in his lively…
Advertisement