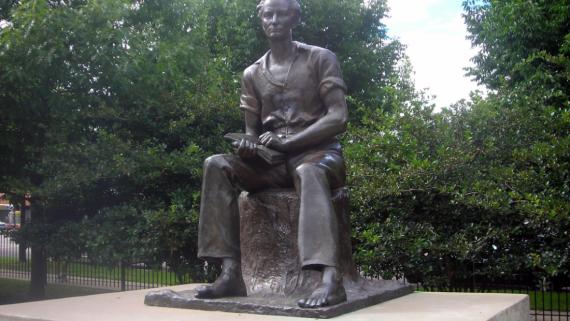 Sculptor Charles Keck produced this idealized portrayal of a young, clean-shaven Abraham Lincoln sitting on a tree stump with bare feet, shirt sleeves rolled up, and a book on his lap. Born in New York City, Charles Keck (1875–1951) studied sculpture at the American Academy of Design, the Art Student League, and the American Academy in Rome. For about five years in the 1890s, he served as an apprentice to the celebrated Irish-American sculptor Augustus Saint-Gaudens. (Interestingly, Saint-Gaudens produced two Chiago Lincoln monuments, which are located in Lincoln and Grant Parks.) Keck created The Young Lincoln towards the end of his career, in the mid 1940s.

Keck’s family donated the thirteen-foot-tall bronze Young Lincoln to the G.A.R. collection of Chicago Public Library on N. Michigan Avenue (now the Chicago Cultural Center). In 1997, the Chicago Public Library loaned the monument to the Chicago Park District to allow for its installation in Senn Park, on the city’s North Side. At the time, the Park District had hired Site Design Group to redesign the park, and the landscape architects incorporated the monument into its plans for the triangular corner between N. Ridge Avenue, N. Clark Street, and W. Thorndale Avenue.

The sculpture is especially appropriate at this location because the site has historic associations with Lincoln. On this property once stood the Kransz family’s Seven Mile House, and early inn. It was long believed that Abraham Lincoln (1809–1865) met with a small caucus of Republican voters there when he was campaigning for the presidency in 1860. Recent research by the Edgewater Historical Society casts doubt on this local myth.