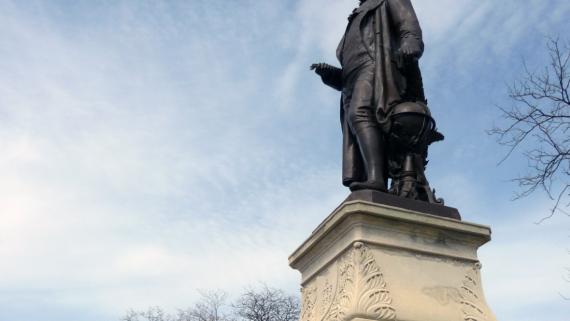 This monument pays tribute to Humboldt Park’s namesake, Alexander Von Humboldt (1769–1859), a naturalist and explorer from the Kingdom of Prussia, now part of modern-day northern Germany. Born in Berlin, Von Humboldt made extensive explorations in Latin America, Russia, and Europe. His work contributed to studies in meteorology, geography, ocean currents and magnetism. Soon after the formation of the West Park Commission in 1869, area residents petitioned to name the park for Von Humboldt and also suggested that it should have a monument to honor him.

German immigrant and Chicago brewer Francis J. Dewes (1845–1922) donated the artwork which was created by Felix Görling (1860 – 1932) , a sculptor who lived and worked in Germany. Görling depicted Von Humboldt holding a book that represents Cosmos, his famous five-volume series. At the feet of the bronze figurative sculpture, a globe and lizard symbolize the famous scientist’s trips to the Amazon to study plant life and to Siberia, where he studied ocean currents. The sculpture was modeled and cast in Germany.

Thousands of German immigrants gathered for the unveiling of the Humboldt Monument on October 16, 1892. The Chicago Tribune reported that in accepting the gift of this monument, West Park Commission President Harvey Thompson said, “This graceful statue of Alexander Von Humboldt typifies one of the greatest and grandest characters of all the ages past… This statue should commemorate and keep alive the deeds of this illustrious man, in the minds of those who shall hereafter spend a pleasant hour amidst the glad scenes of this beautiful park, named in his honor."