Teens using Ergs as part of their fitness routine. 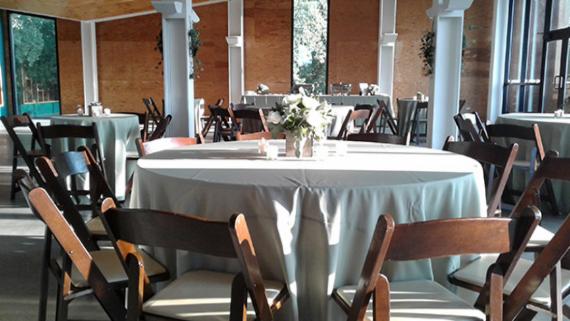 Richard Clark Park comprises 22.42 acres of greenspace along the east bank of the Chicago River in the North Center neighborhood. At the park you'll find soccer field, a free-ride bike park known as The Garden, the WMS Boat House, and new Kerry Wood Cubs Field.

The park's soccer fields and bike trails sit on land once occupied by the fondly-remembered Riverview Amusement Park.

Kerry Wood Cubs Field will be a great resource for park kids, student-athletes and the community. The field, which includes seating for 1,250 spectators and fans, will be used by Chicago public high schools citywide throughout the high school baseball season during and after school hours. The Park District will use the field for recreational leagues and use by the general public.

The Chicago Park District’s WMS Boathouse at Clark Park is the premier rowing center in the city, with year round training and facilities unmatched in the region. Through our partnership with Chicago Rowing Foundation [ [CRF] they will provide low-cost community programs in addition to our existing recreational and competitive teams. In addition to hosting Park District campers and community-inclusive learn-to-row and open rowing events, the Foundation (CRF) will also facilitate participation of  high schools and middle schools in rowing at Clark Park ..

The WMS Boathouse at Clark Park has been thoughtfully designed by Jeanne Gang, FAIA, and her firm, Studio Gang.

The boat house also offers canoe & kayak rentals and a public dock that is available for use by non-motorized boats during park hours. Restrooms are also available to the public when the boathouse vendor is operating.

The Garden is a set of dirt jumps located right in the City of Chicago. There are 3 jump lines and a pump track with multiple routes. The Garden is free, open to the public, and has terrain for all ages and skill levels.

Richard Clark Park comprises over 22 acres of greenspace along the east bank of the Chicago River in the North Center neighborhood. The park's soccer fields and bike trails sit on land once occupied by the fondly remembered Riverview Amusement Park. Riverview, created in 1904 on the site of a former German hunting preserve, was for a time the world's largest amusement park, with a massive roller coaster, a double Ferris wheel, a tunnel of love, a water slide, a parachute drop, and carnival games of skill and chance, among many other things. After the amusement park's demolition in 1967.

In 1986, the park was officially designated Richard Clark Park in honor of a Chicago police officer killed in the line of duty. Richard Clark (1938-1986) was an 18-year police veteran and member of the nearby Belmont Tactical Unit at the time of his death. Clark was shot and mortally wounded on April 3, 1986, while attempting to rescue a victim wounded by a gunman who had barricaded himself in his north side apartment.

3rd Tuesday of the month at 7pm. Out of an abundance of caution Park Advisory Council Meetings will be held virtually for the near future. Please contact the Clark PAC for details.