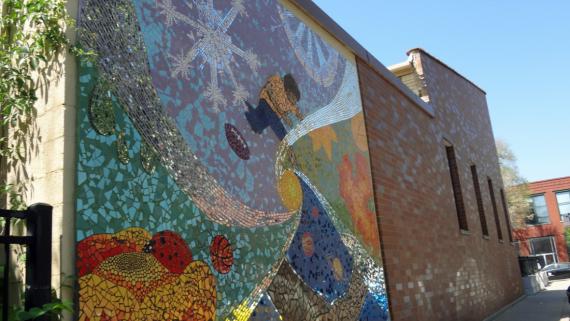 Located on the fieldhouse exterior

The Commercial Club Park Advisory Council sponsored the creation of this bricolage mosaic that embellishes two exterior facades of the park's field house. The artwork was produced with the participation of dozens of middle school and high school students from the community. During brainstorming sessions, advisory council members asked park patrons "What does Commercial Club Park mean to you?". Overwhelmingly, the responses were friendship, safety, and sports.

The Rice Street facade emphasizes different sports during each of the seasons. Around the corner from this wall, the other part of the mosaic is composed of two panels that flank the field house's front doorway. These panels incorporate historical photographs of the park interwoven with a design representing DNA -- a substance that binds us all. The photographs depict puppet shows, T-ball instruction, circus in the park, horse-drawn wagon rides which are often offered during holiday parties in the park, and the ‘green team growers’ young person garden club. The Commercial Club Park Advisory Council and Chicago Park District held a ribbon cutting event on April 26, 2014 following an Earth Day clean-up event and a ‘Thanks-for-giving’ volunteer appreciation gathering at the park.