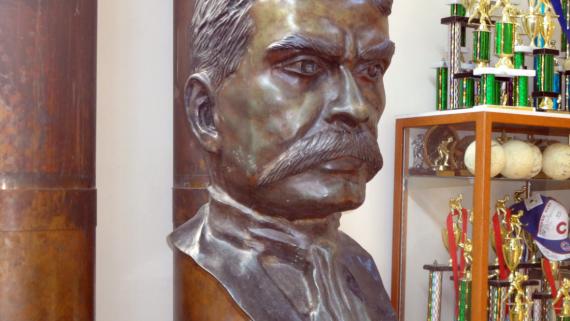 One of Mexico’s most revered national heroes, Emiliano Zapata (1879–1919) led the revolutionary movement against the corrupt dictatorship of President Porfiorio Diaz in 1910. Born into a family of ten children in the state of Moreles in central Mexico, Zapata was the son of a sharecropper. As a teenager, his father died and Zapata began supporting his family by running their small farm. He began to stand up for the rights of peasants and other small landowners in his village of Anenecuilco and to help Fancisco Modero, who planned a rebellion against the corrupt government. With the support of Pancho Villa, Zapata organized bands of locals who went on to overthrow Diaz. Even after a new government was in place, he continued to fight for land and freedom. In 1919, Mexican soldiers ambushed and murdered Zapata.

In the mid 1980s, sculptor Gabriel Ponzanelli (b. 1942) created a bronze portrait bust of Emiliano Zapata for the Palace of Government in Moreles which is located in Cuernavace, Mexico. Since that time, several copies have been made, including this one installed in Harrison Park’s field house and another that is located in Houston, Texas. After receiving the gift of the Zapata Bust, the Chicago Park District Board of Commissioners officially named the Harrison Park field house the Emiliano Zapata Cultural Center.