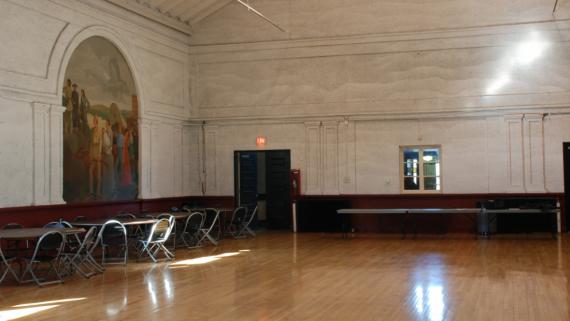 Gage Park had existed for nearly fifty years when members of the surrounding community submitted petitions to the South Park Commissioners requesting that field house facilities should be built there. Completed in 1928, the Neoclassical style building had separate gymnasiums for men and women and an assembly hall in the center. Three years later, Tom Lea (1907–2001) painted a large mural to occupy the space within a blind arch in the assembly hall. Born and raised in Texas, Lea came to Chicago in 1924 to study at the School of the Art Institute under the renowned muralist John Warner Norton. Recognizing Lea’s talents as an illustrator and painter, Norton took him on as an apprentice a few years later. In this position, Lea worked on some of Norton’s most significant murals. Lea married a fellow art student, Nancy Taylor, and in 1930, Norton encouraged the young couple to travel to Europe to study paintings and murals in Italy and France.

In February 1931, shortly after returning from his European excursion, Lea entered into an agreement with the administrators of the John Barton Payne Fund to paint the Gage Park mural for the cost of $1,400. Lea described the subject of the mural as pioneers, suggesting that the figures were “more or less allegorically the various types sung of in Walt Whitman’s ‘Pioneers O Pioneers.’” Lea’s scene includes early explorers and settlers of the Midwest. Three figures—presumed to be seventeenth-century French explorers Marquette, Jolliet, and La Salle—stand on a bluff above the Mississippi River. A group of pioneers, farmers, and townspeople are depicted in the foreground with a covered wagon and buildings behind them. Above the entire scene, a heavenly figure in the clouds points westward. Art historian Mary Lackritz Gray explained that the method Lea used to paint the godlike figure is known as grisaille, a technique relying on shades of gray and white.

In addition to this composition, Lea produced four murals for Calumet Park that are still located in the field house gymnasium. Lea and Norton also created an enormous terrazzo reflecting pool with twelve panels that represented each month of the year. Constructed in front of the Adler Planetarium and completed in 1932, the impressive water feature is no longer extant. Lea left Chicago to live in New Mexico in 1933, and then returned to settle in Texas a few years later. He went on to create murals in Texas, Wisconsin, and Washington D.C. He also served as an artist and correspondent for Life magazine, illustrated several books including two novels that he authored, and continued to write, draw, and paint throughout most of the remainder of his life.