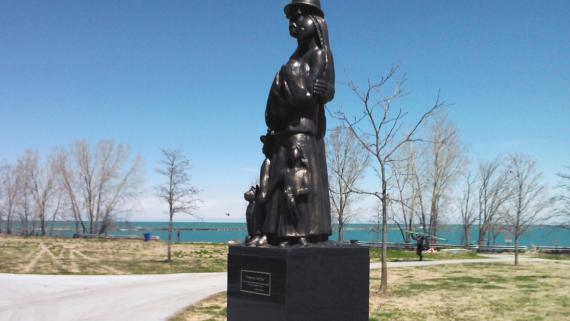 On May 9, 2015, along with community members and other civic leaders, Mayor Rahm Emanuel dedicated Tribute to the Past in Steelworkers Park. The bronze sculptural group portrays a steelworker encircled by and embracing his family. The artwork pays tribute to generations of residents of Chicago's Southeast Side, for whom life was centered around the steel industry.

The area's first steel mill, known as the South Works, strategically located at the juncture between the Calumet River and Lake Michigan, opened in the early nineteenth century. Swedish, Scottish, and German immigrants settled in the area because of the opportunities to work for the steel mills and other nearby industries. In 1901, the US Steel Corporation acquired South Works. At the time, well-paying jobs at the industrial complex attracted Italians, Poles, Mexicans, and African-Americans to make the area their home. At its peak, South Works had more than 20,000 employees. It covered an area of 600 acres, much of which was composed of landfill made of molten slag.

After South Works began downsizing in the 1970s, the mill closed down in 1992. The City of Chicago, Chicago Park District and community organizations have been working together to create ambitious redevelopment plans for the area. Steelworkers Park provides a first step towards realizing these plans.

Chicago artist Roman Villareal sculpted the monument. Villareal grew up and lives on Chicago's Southeast side. He teaches art and has created several other sculptures in parks including the Mermaid in Burnham Park.