Design is underway for the east end of the Midway Plaisance and we want your input.  Learn more and share your input here. 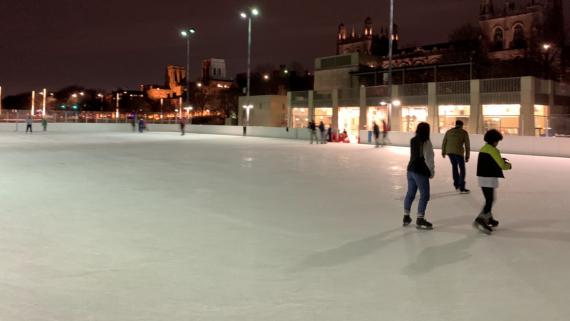 Enjoying a great day at the Midway Plaisance

An eventful day at Midway Plaisance

Located in the Hyde Park community, Midway Plaisance is a special-use facility with an ice skating rink which totals 83 acres and it features a warming center. Green features of the park include a north and south winter garden. Outside, the park offers the ice rink and multi-purpose fields. Many spaces are available for rental including our ice rink, warming center, and fields.

In addition to programs, Midway Plaisance hosts fun special events throughout the year for the entire family, such as movies & summer concert series, and Silver Skates speed skating competition.

The Midway Plaisance is a magnificent linear stretch of parkland between Jackson and Washington parks.All three sites were originally conceived as a single landscape known as SouthPark.Soon after the Illinois Legislature established the South Park Commission in 1869 to create and maintain the park, the newly-appointed commissioners hired Olmsted & Vaux, the nationally renowned designers of New York’s Central Park, to lay out the 1055-acre park.

Concerned about the flat and marshy conditions of the unimproved site, Frederick Law Olmsted Sr. asserted that, “If a search had been made for the least park-like ground within miles of the city, nothing better meeting the requirement could have been found.” He believed, however, that the site possessed one important asset— its relationship with Lake Michigan.Interpreting the lake as a tremendous object of sublime scenery, Olmsted & Vaux used water as the guiding theme for the park’s original plan of 1871..

The designers envisioned an intricate system of lushly planted lagoons covering about one-third of the Lower Division (Jackson Park). This waterway would link with Lake Michigan on the east and with a smaller lagoon called the Mere at the Upper Division (Washington Park) on the west via a long formal canal and pleasure drive, accessible to people walking, riding horses (and carriages), and boating.Olmsted & Vaux named the center landscape the Midway Plaisance. (There is a French word plaisance that roughly translates to “place for boating,” however some dictionaries believe the word is an obsolete spelling of “pleasance,” a secluded part of the landscape or garden.)Despite the importance of the canal to the overall design of the park system, its construction was put on on-hold due to financial problems after the Great Fire of 1871.

Two decades later, Jackson Park was selected as the site for the World’s Columbian Exposition, and Olmsted worked closely with architect Daniel H. Burnham to transform the largely unfinished grounds into the “WhiteCity.”The fair authorities decided to use the Midway Plaisance as the site of amusements, restaurants, foreign villages, and ethnological exhibits.These attractions were allowed to charge extra, and helped the fair become a financial success.The most iconic attraction on the Midway was the world’s first Ferris wheel.Standing to a height of 264-feet, it had thirty-six cars, each with a capacity of sixty people.The twenty-minute ride made two revolutions and cost fifty cents per customer (which was the same cost as a full day admission price for the fair.)

More than twenty million people had visited the fair during the sixth month period in which it was open in 1893.After it closed, the South Park Commissioners hired Olmsted’s firm, then known as Olmsted, Olmsted, and Eliot, to transform the fairgrounds back into parkland.Emphasizing the great success of the electric launches, gondolas, and other types of boats at the World’s Columbian Exposition, Olmsted recommended that his vision for a canal through the Midway Plaisance canal should be considered.The commissioners instructed Olmsted to create a revised plan for the canal, and asked him to estimate the expense of the project including the cost of gondolas.They formally adopted Olmsted, Olmsted & Eliot’s plan for the Midway Plaisance with the canal in 1894.

Although the South Park Commissioners negotiated with the Illinois Central Railroad Company for permission to build part of the canal on railroad right-of-way, the project was delayed again.At the time, transforming the Jackson Park fairgrounds back into usable parkland was the priority, and the canal was proving to be an expensive proposition.In addition to the costs of building the proper crossing over the train tracks and bridges over the water, the project would have also required the construction of a series of locks because of the difference in the elevations of the lagoons, and the fluctuating water levels of Lake Michigan.The canal was considered a future project, and in the meantime, the commissioners installed sewers, drives, walks, bridle paths, reconditioned the wide center lawn, and planted more than 500 elm trees in straight rows lining the driveway.

By the turn of the century, the Midway Plaisance was a popular spot for ice skating and sledding in the winter and strolling and bicycle riding in the summer.Architect Henry Ives Cobb had created the original plan for the adjacent University of Chicago campus, and designed some of the institution’s earliest Gothic style buildings.Coach Amos Alonzo Stagg had his track team train for relay races on the Midway.

Preeminent sculptor Lorado Taft established his Midway Studio out of a converted barn at 60th Street near Ellis Avenue in 1906.Two years later, he began envisioning ways to beautify the Midway Plaisance.Taft suggested implementing the canal, creating three sculptural bridges to span over it: the Bridge of the Arts, the Bridge of Sciences, and the Bridge of Religions, and lining the waterway with statues of the “world’s greatest idealists”.At the extreme ends of the broad boulevard Taft suggested two monumental sculptural fountains, the Fountain of Creation on the east end, and the Fountain of Time on the west end.

While most of Taft’s proposal was never seriously considered, the B.F. Ferguson Fund of the Art Institute agreed to commission the Fountain of Time in tribute to an 1814 peace treaty between England and the United States.Completed in 1922, the impressive monument was inspired by a poem entitled the Paradox of Time by Henry Austin Dobson.It is composed of a crag-like figure of Father Time watching over a procession of 100 human figures, with a symbolic reflecting pool in between.

In the late 1930s, Chicago Park District landscape architect May E. McAdams designed a perennial garden at the east end of the Midway Plaisance which followed the configuration of the circular sunken lawn panel— the outline of what would have become the canal’s turning basin.McAdams’ garden provided the inspiration for the 2005 Allison Davis Garden designed by landscape architect Peter Lindsay Schaudt and located on the west end of the Midway Plaisance .The new garden pays homage to renowned social anthropologist Allison Davis (1902 – 1983) a pioneering scholar who was the first tenured African-American professor at the University of Chicago.

The Chicago Park District and University of Chicago also worked together on the development of new gardens on the north side of the Midway Plaisance, the Winter Garden and the Readers’ Garden. Other recent improvements to the Midway include a rink for ice skating in the winter and in-line skating in the summer. Located in the center of the Midway just west of S. Woodlawn Ave., the rink stands on the exact location of the historic Ferris wheel.

The restoration of the Fountain of Time has been one of the most challenging and expensive of the recent improvements in the area.Expert conservator Andrzej Dajnowski began intensive studies to determine the appropriate conservation treatment for the historic concrete fountain in 1992.The $2 million project has been funded by the Chicago Park District, the Ferguson Fund of the Art Institute, a Save America’s Treasures Grant, the University of Chicago, the Parkways Foundation and private donors.Conducted in two major phases between 1998 and 2002 and between 2002 and 2009, sculptural fountain and its reflecting basin have been fully conserved, the surrounding landscape has been improved, and monument’s lighting has been upgraded.